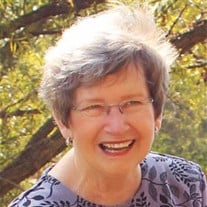 Margaret Janell (Jones) Walters, daughter of Laborn Lavern Jones and Agnes Ada (Pitts) Jones, was born July 27, 1941 in Lebanon, MO. Janell grew up and attended school in the Grovespring and Lebanon areas. As a young girl, Janell had a special spirit. She strived to please and always wanted everyone to love her. She was a true perfectionist. At an early age, she began singing at her father’s churches and many revivals. Janell loved to sing and praise the Lord. She was baptized twice; once in the Baptistery and her proudest moment, being baptized in the river. She was a member of the First Baptist Church of Waynesville, where she taught Sunday school and as a Deacon’s wife, supported many church activities. Janell was the epitome of a true Virtuous Woman. On many different occasions, Janell started noticing a wiry young man, Bill Walters. First, at the service station her dad traded at and then at the skating rink. He seemed to be everywhere she went. When they finally struck up a conversation, it started a courtship and marriage, which lasted more than 62 years. Janell and Bill were united in marriage on June 2, 1956. They had one son, Randy. Although, Janell thought Randy hung the moon, when the doctor announced she had a boy she said, “I want a girl. Put it back!” When Randy was very young, he showed an interest in playing baseball. She spent many hours in the yard with a baseball glove on “working him out” until he threw hard enough to break the blood vessels in her hand. One of her favorite things to do was watching his many sports activities and traveling to his ball games. Janell finally got the girl she always wanted when Randy married his high school sweetheart, Cindy. Cindy was truly the daughter she always wanted and her best friend. Her blessings continued with the addition of her two beautiful granddaughters, Sarah and Whitney, and later with her two great-grandchildren, Kinslee and Camden. To say Janell had many talents is an understatement. She was successful at each and every endeavor. She began her working career as a beautician at Empress Beauty Shop in Lebanon. While there, she met Faye McElroy. That meeting grew into a long musical duo, the “Gospel-Ettes.” Janell and Faye sang all over the country, including churches, state fairs, weddings, funerals, and other community events. They also appeared on “The Slim Wilson Show.” Janell and Faye recorded three albums, one in Nashville where some of Elvis Presley’s musicians provided the accompaniment. Janell studied and trained to be an EMT and co-owned AAA Ambulance Company in Laclede County. She worked as a nurse for Dr. Dennis Hite at the Harwood Clinic and later as the plant nurse at H.D. Lee in Lebanon. In March of 1981, Janell and Bill invested their life savings in a new calling, Waynesville Memorial Chapel. They worked tirelessly to earn the trust and confidence of the families in the Waynesville/St. Robert/ Ft. Leonard Wood area. She was an active member of Lebanon and Waynesville/St. Robert Chamber of Commerce. She loved the fellowship of the BPW ladies. She spoke of many wonderful memories while traveling to different events with “the girls.” There were many hobbies Janell enjoyed. She loved singing gospel music, going on Lebanon Antique Car Club trips, especially to Eureka Springs, Arkansas. She was an avid St. Louis Cardinals Baseball fan. She watched faithfully from start to finish and many times watched the replay the following day. Most of all, Janell looked forward to trips to Branson and Silver Dollar City in the RV with her beloved granddaughters, Sarah and Whitney. On the afternoon of April 14, 2018, Janell went home to be with her Lord surrounded by her loving family while under Hospice Care at Elfindale Manor Skilled Care facility in Springfield, MO, at the age of 76 years, 8 months and 17 days. It was only fitting that the Gospel-Ettes was playing in the background and the Cardinals were winning their game. Janell is survived by her loving husband, Bill of the home; her son, Randy Walters and his wife, Cindy of Springfield; two granddaughters, Sarah Mitchell, her husband, Matt and their daughter, Kinslee of Lee’s Summit, and Whitney Smith, her husband, Daniel and their son, Camden of Springfield; her brother, Lavon Jones and his wife, Vicky of Kansas City; aunt, Kay Light and her husband, Carl of Lebanon; uncle, Clifford Pitts and his wife, Alene of Lebanon; sister-in-law, Rosemary Hull and her husband, Carl of Clinton; brother-in-law, Russell Walters of Lebanon; several nieces, nephews, great nieces and nephews along with many friends. She was preceded in death by her mother, Ada; father: Lavern; brothers: Lavell and Dean Jones; sister: Janice Hurt and very dear friends: Don and Dorothy Reeves. To the doctors, nurses and staff on the 4th floor B and C Halls, and 3rd floor A Hall at Mercy Hospital in Springfield; Haven Home Health Care and Therapy of Ozark; everyone at Elfindale Manor Skilled Care in Springfield and Compassus Hospice in Springfield – you have our eternal love and gratitude. Services will be held at 1:00 p.m. Friday, April 20 in Memorial Chapels and Crematory of Waynesville/St. Robert. Burial will follow in Sunset Memorial Estates Cemetery. Visitation will be from 4:00 to 7:00 p.m. Thursday in the funeral home. Memorial contributions may be made to Faith Baptist Church of Waynesville.

The family of Janell Walters created this Life Tributes page to make it easy to share your memories.