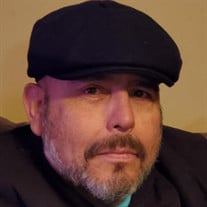 Javier Gamboa Guerrero, 66, of Waynesville, MO, passed away on 14 September 2021. He was born to Angelina and Juan, on 29 August 1955 in Santa Maria, CA. He grew up in Santa Maria and then went on to graduate from Santa Maria High in 1973. Javier made a profession of his faith and attended service every Sunday at Westside Baptist church. Anyone who knew Javier knew how strong his relationship was with God because he strived to be very Christlike. Javier served in the USMC shortly before transferring his service to the ARMY where he would then retire after 24 years at Fort Leonard Wood, MO as a 1SG. He did go on to work at other jobs within the installation but most recently worked for Anatox where he was doing Quality Control for the last 6 years. In his free time Javier could be found spending time with his family, swimming and grilling with his grandbabies, coaching and reffing volleyball games. He was involved in the community and loved volunteering throughout the church. He strived to make a difference and was involved with as many activities as possible. Javier met Frieda Faris-Guerrero in 1999, then after 14 wonderful years of friendship they were married on June 26, 2013. Together they shared 8 blissful years of marriage. Through this union of families Javier was blessed with 7 daughters: Calendre Norris, Rachael Croft, Corrie Barbara, Isabelle Faris, Victoria Ulibarri, and Sarina Guerrero. Javier is survived by: Calendre (Michael Norris) of Fort Riley, KS. Rachael (Harley Croft) of Fort Carson, CO. Corrie (Joey Barbara) of Chesapeake, VA. Victoria (Eric Gutierrez) of Brookings, OR. Sarina Guerrero of Menifee, CA. Isabelle Faris, of Waynesville, MO. His brothers/sisters: Rachel (Raul Magallon), Mario Guerrero, Richard Guerrero (Margret), Martha Heredia, Irma Magallon, Johnny Guerrero (Wendy), Alice Guerrero, and Angie Guerrero. He also leaves behind numerous nieces and nephews. His grandchildren: Grant, Autumn, Michael, Emersyn, Paige, Lilly, Samuel, Cecilia, Elena, Canan, Niko, Ethan, Julian, and Trystin. His great grandchildren: Anastasia, Analena. He was preceded in death by his parents Juan & Angelina Guerrero. His wife Frieda Faris-Guerrero. His sisters Anselma Mendoza & Guadalupe Rivera. His brother Raul Gamboa. A celebration of life will be held at Memorial Chapel and Crematory by Pastor John Shaw on September 23,2021. Family viewing will be from 15:00-16:00. Services will start at 16:00. Memorial contributions may be made in memory of Harvey Guerrero and may be left at Memorial Chapels and Crematory of Waynesville / St. Robert.

Javier Gamboa Guerrero, 66, of Waynesville, MO, passed away on 14 September 2021. He was born to Angelina and Juan, on 29 August 1955 in Santa Maria, CA. He grew up in Santa Maria and then went on to graduate from Santa Maria High in 1973. Javier... View Obituary & Service Information

The family of 1SG (Ret) Javier Gamboa "Harvey" Guerrero created this Life Tributes page to make it easy to share your memories.

Javier Gamboa Guerrero, 66, of Waynesville, MO, passed away on...