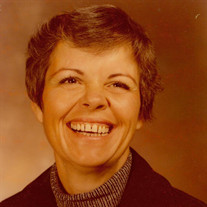 Jaynell Webb, daughter of the late Willie Edger Marion James and Beulah Ethel (Ford) James, was born July 30, 1935 in Savannah, Oklahoma. She passed away Sunday, April 30, 2017 in the Osage Beach Rehabilitation and Health Care Center of Osage Beach, Missouri having attained the age of 81 years. Jaynell grew up in Oklahoma and attended school there. On February 28, 1953 in Sebastian County, Arkansas, Jaynell was united in marriage to Gerald William Webb. They shared over 22 years of marriage together before he preceded her in death on June 28, 1975. Jaynell and Gerald were blessed with six children: Pamela, Deborah, Sandra, Brenda, Laura and Little Berry. In her spare time, Jaynell enjoyed reading and handwork, such as crocheting, knitting and sewing. Jaynell was a member of the Crocker Presbyterian Church and enjoyed worshipping with her church family until her health did not permit her to do so. She also loved to spend time with her family and friends, especially her grandchildren. Jaynell will be sadly missed, but fondly remembered by all those that knew and loved her. She leaves to cherish her memory five daughters, Pamela Welsh of Ocean Springs, MS, Deborah Beal (Wayne) of Crocker, MO, Sandra Webb of Decatur, MI, Brenda Golden (Michael) of Hartville, MO, and Laura Barker of Linn, MO; a son, Little Berry Webb of Galena, MO; a step-daughter, Veila Locke (Scott) of Memphis, TN; her brother, JD James of Oklahoma City, OK; seventeen grandchildren, twenty-two great-grandchildren; a great-great-granddaughter; two step-grandchildren; seven step-great-grandchildren; a number of nieces and nephews; as well as a host of other relatives and friends. In addition to her parents and husband, Jaynell was preceded in death by two sisters: Ozell Decker and Lola Brigance; and two brothers: LD James and Bill James; one son-in-law: Michael Welsh; one daughter-in-law: Gail Webb; and one great-great granddaughter: Angel Gowers. Services were held at 2:00 p.m. Saturday, May 6, 2017 in the Crocker Presbyterian Church of Crocker, Missouri with Dr. Bill Agnew officiating. The songs “Angels In the Room”, “Home” and “Serenaded By Angels” were played. Serving as escorts were Jaynell’s grandsons and great grandsons. Burial followed in the Bethlehem Cemetery near Richland, Missouri. Services were under the direction of Memorial Chapels and Crematory of Waynesville / St. Robert.

The family of Jaynell Webb created this Life Tributes page to make it easy to share your memories.