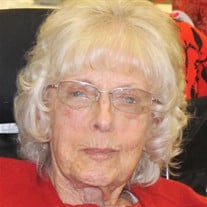 Jean Martin Ely (age 84) of Owensville, Missouri passed away Sunday, April 15, 2018 at 11:49 p.m. from complications due to pneumonia. She was surrounded by her family and friends and was holding the hand of her Granddaughter Tarese Nicole Schoffstall. Jean was born Nov 21, 1933 in Barre, Vermont to the parents of Herbert Lewis MacLeod and Doris Lillian Barton. Herbert MacLeod’s parents were Alexander MacLeod and Annie McAuley. Doris Barton’s parents were Fred W. Barton and Marietta Martin. Jean was the only child. Jean’s first job was bookkeeper at the Rock of Ages Granite Quarry in Graniteville, Vermont. She worked with her dad who was the foreman and engineer at the Quarry. Her dad taught her how to fish and ski; they enjoyed skiing the slopes of Stowe, Vermont. She was a Music of Arts major at Bob Jones University in Greenville, South Carolina. Jean worked at Bell Telephone selling telephones and as a switch operator. It was while working at Bell Telephone that she would be introduced to Raymond Ely (previously passed December 6, 2003). Jean started playing the piano at 12 years old. Her mom thought it was best that she learned from an accomplished teacher, even though she herself played the piano for the local church. Jean’s first piano teacher was Josephine H. Perry who was known for the piano piece she authored and played, “Hail Vermont” which became the State song. In the late 1940’s Jean would play piano and chimes for the First Presbyterian Church of Barre, Vermont and for special events. Throughout the 1950’s she would play the piano as her mom played the organ for the First Presbyterian Church of Graniteville, Vermont. She married Raymond Oliver Ely on October 30, 1959. Together they had 5 children; Mark Raymond Ely, Gary Lewis Ely, Glenn Scott Ely, John Eric Ely and Dorinda Jean Ely. John and Dorinda are twins. As a dependent wife of an active duty member of the Unites States Army, they were stationed at multiple posts: Fort Lee Virginia, Augsburg, Germany, Fort Sill, Oklahoma and finally Fort Leonard Wood in 1966 where they retired. Jean played the piano for the First Christian Church, Buckhorn Baptist Church, Waynesville Baptist Church and First Baptist Church, Waynesville until 2008. She gave piano lessons to numerous children and young adults throughout that period. Jean lost her only daughter (Dorinda Jean Ely) to leukemia in December 1970. Dorinda was only five years old. Jean never left the area because the connection with her daughter and the location she was buried. Jean enjoyed communicating through music. She would use any opportunity to share her talents with her friends and family. Jean’s finger warmups would always start with the Missouri Waltz following a quick step into the Boogie Woogie. Jean lived a life full of happiness and made many memories with those who loved and cherished her most. She was thankful for the life her Lord and Savior had blessed her with and, above all, wanted everyone to know that without God we would be nothing. Her family and friends will greatly miss her witty humor and beautiful smile, but find peace in knowing she is right where she has always longed to be; in her forever home. Jean leaves to cherish her memory, her Children: Mark Raymond Ely and wife Linda, Gary Lewis Ely and wife Sandy, Glenn Scott Ely and wife Crystal, and John Eric Ely and wife Christina. Grandchildren: Dustin Lane, Tarese Nicole Schoffstall and husband Brian, Paul MacLeod Ely, Nathan Scott Ely, Rachel Mariah Saladino and husband Billy, Zachery Alexander Ely, Joshua Dean Ely, Dorinda Michelle Ely, Brandon Scott Ely, Devon Raymond Jacoby-Ely, Lauren Elisabeth Ely, Ryan Scott Ely, Paige Analiese Ely, Landon Scott Ely, and Caden Scott Ely. Great Grandchildren: Julielle Elizabeth Hub, Lydia Brown, Hayden Blake Schoffstall, Chloe Blayke Schoffstall, Cora Blaike Schoffstall, and one greatly anticipated. Services were held at 2:00 p.m. Monday, April 23, 2018 in the Memorial Chapels and Crematory of Waynesville / St. Robert with Brian Schoffstall officiating. The songs “Amazing Grace” and “Because He Lives” were played. Serving as escorts were Mark, Gary, Glenn, John, Nathan, Brandon, Ryan, Joshua, Zach and Devon Ely. Burial followed in the Missouri Veterans Cemetery of Waynesville, Missouri. Memorial contributions may be made in memory of Jean Ely and may be left at the funeral home.

Jean Martin Ely (age 84) of Owensville, Missouri passed away Sunday, April 15, 2018 at 11:49 p.m. from complications due to pneumonia. She was surrounded by her family and friends and was holding the hand of her Granddaughter Tarese Nicole... View Obituary & Service Information

The family of Jean M. Ely created this Life Tributes page to make it easy to share your memories.