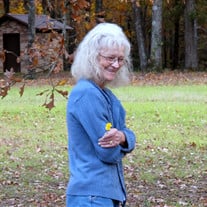 Melba Jean “Jeanne” Gregory Reeves, age 73 of Texarkana, AR was born February 21st 1945 in Joplin, MO to Lois Lee Lloyd and Lawrence F. Gregory. She passed away peacefully in her home surrounded by loved ones on October 17th, 2018. Jeanne spent her childhood near Camdenton, MO with her mother and siblings. Her heart was filled with love for her family, and she had a fondness for all animals, especially her dogs and chickens. She was a stay at home mom for many years but spent a large part of her life employed as a secretary, retiring from Tan Tara Resort in Osage Beach, MO. Jeanne was baptized and accepted the Lord as her Savior in October of 1985. She grew strong in her faith holding that day very precious in her heart her entire life. She was united in marriage to J.R. Reeves October 8th, 1994, and joined him in making their home in Texarkana, where they enjoyed 24 years of fishing, gardening, and retirement together. Jeanne is survived by her husband J.R. Reeves of the home, one daughter Cindy Lundh of Eldon, MO; 3 stepchildren, Steven Reeves, Jay Reeves, and Lachel Reeves Nelson, all of Texarkana; 4 sisters, Lois Lupi and Earlene Henson both of Lebanon, MO, Dessa Krcma of DePere, WI, and Freda Thomason or Bowling Green, KY; 3 Grandchildren, Shane Lundh of Eldon, MO, Ashli Bowman of Jefferson City, MO, Heath Lundh of Laurie, MO; 5 great grandchildren, and a number of other relatives and friends. Jeanne was preceded in death by her parents, her brother Jim Catron, and 1 granddaughter Tyla D. Lundh. Internment with a private graveside service will be held at a later date in the St. John Swede Cemetery near Swedeborg, MO. Arrangements are under the direction of Memorial Chapel of Richland. In lieu of flowers, the family has requested memorial contributions be made to the St. John Swede Cemetery Fund in Jeanne's memory and may be left at the Memorial Chapel of Richland.

The family of "Jeanne" Reeves created this Life Tributes page to make it easy to share your memories.