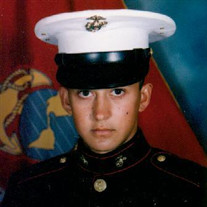 Jeffery Louis Farkasdi, son of Louis and Bella (Bantigue) Farkasdi, Jr., was born August 12, 1973 in Limestone, Maine. He passed away Tuesday, August 25, 2015 in his home having attained the age of 42 years. Due to his father being in the military, Jeffery grew up and attended school in Dixon, Missouri and Camp Zama, Japan. While in high school, he was on the high school wrestling team and graduated in 1991. Shortly after graduating from high school, Jeffery entered the United States Marine Corps and served his country faithfully until his honorable discharge in 1996. He served as an infantryman and was meritoriously promoted to Lance Corporal and Corporal. After serving in the Marine Corps, Jeffery began working on Fort Leonard Wood as a civil servant for the past 17 years. In his spare time, he enjoyed being outdoors while fishing and also enjoyed going bowling, playing Bingo with his mother and playing his drums. He was a member of the American Legion Post 331 of St. Robert. Jeffery will be sadly missed, but fondly remembered by all those that knew and loved him. He leaves to cherish his memory, his parents: Louis and Bella Farkasdi of Waynesville, MO; one sister: Lina Rose and husband Darrell of Killeen, TX; one brother: CW3 (Ret) Samuel L. Farkasdi and wife Heidi of Enterprise, AL; five nieces and nephews: Jeffery Farkasdi, Amber Farkasdi, Chance Reed, Christon Reed and Desiree Reed; several aunts, uncles, cousins, other relatives and friends. Services were held at 1:00 p.m. Tuesday, September 1, 2015 in the Memorial Chapels and Crematory of Waynesville / St. Robert with Pastor William Kempen officiating. The song “Amazing Grace” was played and serving as escorts were Jeffery Farkasdi, Samuel Farkasdi, Richard Bantique, Christon Reed, Chance Reed and Jack Vaughan. Burial with military honors followed in the Missouri Veterans Cemetery of Waynesville. Military honors were provided by the Missouri Honors Team. Memorial contributions may be made in memory of Jeffery Farkasdi and may be left at the funeral home.

Jeffery Louis Farkasdi, son of Louis and Bella (Bantigue) Farkasdi, Jr., was born August 12, 1973 in Limestone, Maine. He passed away Tuesday, August 25, 2015 in his home having attained the age of 42 years. Due to his father being in... View Obituary & Service Information

The family of Jeffery L. Farkasdi created this Life Tributes page to make it easy to share your memories.