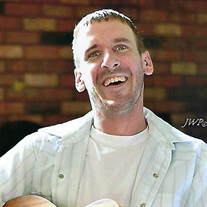 Jeffry Wayne Stephens II, son of Jeffry Wayne Stephens and Lory Ann (Knight) Linné, was born November 4, 1982 in Bryan, Texas. Jeffry grew up in Bryan and The Woodlands, Texas until the age of fifteen when his family moved to Richland, Missouri. Jeffry and his sister Jinger spent summers with their mother Lory in California. They always looked forward to the adventures she planned for them. He graduated from Richland High School with the Class of 2001. Jeffry attended the Rocky Mountain School of Photography after high school. He then furthered his education by attending Missouri State University. He wanted to be a teacher. Jeffry worked for his father in his machine shop during much of his adult life. Jeffry loved learning new things and his Dad loved teaching him and sharing that time with him. Jeffry was passionate about music. He was an accomplished guitar player. He loved to sing and write songs and play for his friends and family. Jeffry loved to eat and became a skillful and creative cook. Jeffry’s family always prayed that he would find the love of a woman who was deserving of his incredibly strong, loving heart. Their prayers were answered when he met Toni Brown. Although their time together was not nearly long enough, he felt it and proclaimed his love and gratitude for her to those close to him. Jeffry passed away Thursday, January 3, 2019 in his home in Richland, Missouri having attained the age of thirty-six years. He will be sadly missed but fondly remembered by all those that knew and loved him. He leaves to cherish his memory, his father, Jeffry Stephens (step-mother Karen Somers) of Richland, MO, his mother, Lory Linné (step-father James) of Reno, NV; his niece, Jasmine Stephens of Richland, MO; two step-mothers, Kimberly Allen of College Station, TX and Lisa Stephens of Bryan, TX; his brother, Jesse Stephens of College Station, TX; two sisters, Amanda Stephens and Candace Stephens, both of Bryan, TX; his grandmother, Sandra Knight of Kernville, CA; his girlfriend, Toni Brown of Richland, MO; as well as a host of other nieces, nephews, uncles, aunts, and cousins. Jeffry was preceded in death by his sister, Jinger Lee Stephens. Even though he is gone from our sight, the memory of his love, music and laughter will live on in our hearts forever. Services were held at 4:00 p.m. Thursday, January 10, 2019 in the Memorial Chapel of Richland with Pastor Mitch Henson officiating. Pastor Henson also sang “Let It Be/How Great Thou Art” and the songs “Hallelujah”, “Come As You Are” and “Spirit in the Sky” were played. Also Jeffry’s uncle, Joe Stephens, read the obituary and stepmothers, Kim and Lisa, recalled their wonderful memories of Jeffry. A Memorial Service will also be held May 26, 2019 in Reno, Nevada for Jeffry’s west coast family and friends. Memorial Contributions in memory of Jeffry Stephens II, can be left at the funeral home.

Jeffry Wayne Stephens II, son of Jeffry Wayne Stephens and Lory Ann (Knight) Linné, was born November 4, 1982 in Bryan, Texas. Jeffry grew up in Bryan and The Woodlands, Texas until the age of fifteen when his family moved to Richland,... View Obituary & Service Information

The family of Jeffry Wayne Stephens II created this Life Tributes page to make it easy to share your memories.