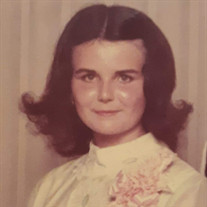 Jenny (Jones) Williams, daughter of the late Herbert Eugene and Virginia (Morris) Jones, was born December 24, 1957 in Fort Bragg, North Carolina. She passed away Thursday, April 30, 2020 in the Memorial Hospital of Belleville, Illinois having attained the age of 62 years, 4 months and 6 days. As a young girl, Jenny grew up in a military family, but graduated from high school in Jesup, Georgia. On December 11, 1976, Jenny was united in marriage to Francis James Williams in Jesup, Georgia. They shared over 42 years of marriage together and were blessed with one daughter, Virginia. Jenny had the privilege of staying at home and raising her daughter. When she became a grandmother, it was her greatest joy to be able to babysit them and help raise them. They were her greatest treasures. In her spare time, Jenny enjoyed reading books, especially those that had anything pertaining to history. But most importantly, she loved her family and treasured all the times they could spend together. Jenny will be sadly missed, but fondly remembered by all those that knew and loved her. She leaves to cherish her memory, her husband: Frank Williams of St. Robert, MO; one daughter: Virginia Tatro (Jean-Pierre Letarte) of Wilton Manors, FL; two grandchildren: Alexander Tatro of Wilton Manors, FL and Madison Tatro of St. Robert, MO; three brothers: Walter Jones (Debbie) of Jesup, GA, James “Al” Jones (Anna) of Jacksonville, FL and David Jones (Melissa) of Jesup, GA; several nieces, nephews, other relatives and friends. In addition to her parents, Jenny was preceded in death by one brother: Jerry Jones. Celebration of Life Services were held at 4:00 p.m. Wednesday, May 6, 2020 in the Memorial Chapels and Crematory of Waynesville with Pastor Keith Carnahan officiating. The songs “Amazing Grace” and “How Great Thou Art” by Elvis Presley were played. Memorial contributions may be made in memory of Jenny Williams and may be left at Memorial Chapels and Crematory of Waynesville / St. Robert.

The family of Jenny (Jones) Williams created this Life Tributes page to make it easy to share your memories.

Jenny (Jones) Williams, daughter of the late Herbert Eugene and...