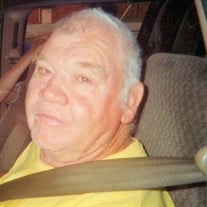 Jerome Henry (Jake) Mennemeyer, was born April 6, 1938, to the late Anne (Dobleman) and Arnold Mennemeyer, in Old Monroe, Missouri. He attended the local parish school and graduated the 8th grade. He worked with his father raising milk cows until approximately 1957. Being a very loyal young man, he lived with his mother until he married Carol Ethel Minks in 1963. They have four children, Lori, Anna, Michael and Karen. He worked hard for his family throughout the years and had many proud accomplishments. He was instrumental in helping build the Missouri Interstate Highway system, original Busch Stadium, Gateway Arch, to name a few. In 1976, he became disabled after 3 concrete walls fell on him. If you think this kept him down, it did not. He became an even greater dad who loved his kids and grandkids and many individuals who needed just a friend. He will always be our “superman”! Jake passed away Wednesday, February 25, 2015 in the Lebanon South Nursing and Rehab Center of Lebanon, Missouri having attained the age of 76 years. Jake leaves to cherish his memory, four children: Lori Lynn Mennemeyer-Sweet (Joseph) of St. Louis, MO, Anna Marie LeBlanc (Roy) of the state of North Carolina, Michael Gerard Mennemeyer (Sherry) of Waynesville, MO, Karen Dawn Mennemeyer-Schambach (Jimmy) of Holts Summit; 11 grandchildren; 7 great grandchildren (along with several on the way); four brothers: Marvin, Lifard, David and Ronnie; two sisters: Lorene Walker and Verna Fan; nieces, nephews, other relatives and a very dear friend to many. In addition to his parents, Jake was preceded in death by his wife: Carol; five brothers: Frank, Ralph, Virgil, Gregory and Junior Mennemeyer; one sister: Arnie; and one grandson; Charles Mennemeyer. Services were held at 11:00 a.m. Tuesday, March 3, 2015 in the St. Robert Bellarmine Catholic Church of St. Robert, Missouri with Father John Groner officiating. Music was provided by Evelyn Horine and January Mennemeyer. Serving as escorts were the Knights of Columbus. Burial followed in the Resurrection Cemetery of St. Robert, Missouri. Memorial contributions may be made in memory of Jerry Mennemeyer and may be left at the funeral home.

The family of Jerome Henry Mennemeyer created this Life Tributes page to make it easy to share your memories.