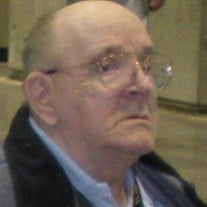 Jerry Owen Chandler, beloved son of Owen Meridith and Ruth Carolyn (Hilke) Chandler, was born August 14, 1945 in the St. Louis, Missouri Jewish Hospital. Jerry accepted Jesus Christ as his personal Savior as a young boy and followed in baptism. Jerry enjoyed his time in school and obtained his High School diploma. Jerry loved everything about farming and caring for his cattle. He moved to Iberia, Missouri to his aunt’s farm, putting in an honest day’s work every day until his health failed him. Jerry then moved, settling in to the small community of Richland in 2005. Jerry would often begin his day drinking a Dr. Pepper, his favorite drink; usually at the old Ozark Outdoorsman, where he’d also enjoy a heaping dish of “Granny’s” also known as, Eva Lambeth’s famous chicken and dumplings. It was also a place where Jerry could visit with his friends and neighbors while catching up on the town news. However, Jerry couldn’t leave the restaurant without placing an order for two hamburger patties to go for his beloved dog, Boston. He later got acquainted with Rob and Carolyn’s dog, Rosko, enjoying him as well. Jerry was a devoted baseball fan of his favorite team, the St. Louis Cardinals. He also loved square dancing, listening to the old country singers like, Hank Williams and various gospel music. He enjoyed watching the history channels and old movies; especially if John Wayne happened to be in the starring role. He supported his buddy Rob’s love of fishing, listening to each detail as it was given. Jerry had an ornery side, and enjoyed keeping “his Caroline” as he affectionately called her, on her toes while she lovingly cared for him. He loved phone calls and visits from “Caroline’s” sister, Bonnie and her mom, Mary who he often referred to as, “Mom.” Jerry passed away the morning of Tuesday, October 25, 2016, in Windsor Estates Nursing Home having attained the age of 71 years. He was preceded in death by his parents. Jerry counted all his friends a blessing and leaves behind to cherish his memory, special friends and caregivers, Rob and Carolyn Lambeth of Richland, MO; several aunts, uncles, and friends. Jerry touched many lives while here. Though he’s gone from our site, Jerry will always remain in the hearts of those who knew and loved him. A graveside service was held at 1:00 p.m., Friday, October 28, 2016, in the Mt. View Cemetery with Pastor Christopher Hendrix Sr. officiating. Favorite songs included, “I Want to Stroll over Heaven with You” and “In the Garden.” Serving as pallbearers were Lee Roy Myers, Sherman DeBerry, Clyde Winfrey, Rob Lambeth, Keith Lundh and Jerry Traw. Burial followed in the Mt. View Cemetery near Richland, MO. Services were under the direction of Memorial Chapel of Richland. Memorial contributions may be made to the Mt. View Cemetery in Jerry’s memory and may be left at the funeral home.

The family of Jerry Owen Chandler created this Life Tributes page to make it easy to share your memories.