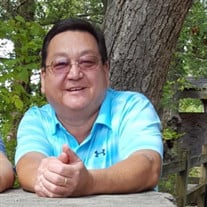 Jerry Raymond Levett, Jr., also known as Chief or Junior Levett, son of the late Jerry Raymond Levett and Kwi Nim (Yoon) Levett, was born January 6, 1965 in Fort Leonard Wood, Missouri. Junior grew up in the Waynesville/St. Robert area and graduated from Waynesville High School with the Class of 1983. He furthered his education at Baptist Bible College in Springfield, Missouri. On September 11, 1993, Junior was united in marriage to Belinda Sue “Linda” Kidd in Camdenton, Missouri. They shared over 27 years of marriage together and many, many wonderful memories. Junior was the owner/operator of Auto Transport Trucking Business from 1998-2005. He then began working at Sellers-Sexton Ford in St. Robert and was currently a wholesale manager for the company. In his spare time, Junior enjoyed being out on the water while fishing and kayaking. He loved to cook and was always sharing his cooking ideas with family and friends. He enjoyed making people laugh and he loved to sing. Junior made an important decision in his life and accepted Jesus Christ as his Savior and was baptized. He was currently attending Westside Baptist Church and was involved with the choir and praise team. He loved going to singings and helping behind the scenes, wherever he was needed. Junior went home to be with his Lord Friday, November 27, 2020 in the University of Missouri Hospital and Clinics of Columbia, Missouri having attained the age of 55 years. He will be sadly missed, but fondly remembered by all those that knew and loved him. Junior leaves to cherish his memory, his wife: Linda Levett of the home; his two dogs: George and Mindy; three sisters: Maria Griffin of Camdenton, MO, Joann Kilian of Lee’s Summit, MO and Judy Vaughan of Springfield, MO; father-in-law: Raymond Kidd of Waynesville, MO; several nieces, nephews, other relatives, and friends. In addition to his parents, Junior was preceded in death by his stepfather: Laurine Lumblad; and two brothers-in-law: Jerry Kilian and Douglas Kidd. Funeral services were held at 10:00 a.m. Thursday, December 3, 2020 in the Westside Baptist Church of Waynesville with Pastor John Shaw officiating. Tom Gullett, Junior’s brother-in-law, recalled his wonderful memories of Junior. Music was provided by Mike Freeman and Becky Lercher. Serving as escorts were Craig Sellers, Carl Brooks, Jeff Stokes, Larry Spears, Charles Conley, Ryan Vaughn, Austin Kilian, and James Fincher. Serving as honorary escorts were Tom Gullett, Matt Frkovich, Dan O’Malley, and David Griffin. Burial followed in the Sunset Memorial Estates Cemetery of Waynesville. Services were under the direction of Memorial Chapels and Crematory of Waynesville / St. Robert. Memorial contributions may be made in memory of Junior Levett and may be left at Memorial Chapels and Crematory of Waynesville / St. Robert.

The family of Jerry "Chief / Junior" Raymond Levett Jr. created this Life Tributes page to make it easy to share your memories.