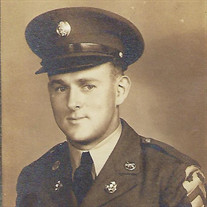 MSGT (Ret) Jesse Wayne Deardeuff, son of the late Alpha A. and Gertie (Paulson) Deardeuff, was born May 24, 1918 near Crocker, Missouri where he grew up and attended Sweethome School #21. He then graduated Valedictorian from Crocker High School with the Class of 1933. After graduation, Jesse decided to stay on the family farm and work. Feeling compelled, he then enlisted in the United States Army on August 28, 1940 and served faithfully for 21 years, 9 months and 16 days until his retirement in June 1962. His assignments took him to England, France, Belgium, Germany, Korea, Japan, and Alaska. He was shot in the World War II Battle of the Bulge, earning him a Purple Heart. His other military awards include the Bronze Star Medal, Good Conduct Medal with five bronze loops, American Defense Service Medal, American Campaign Medal, European-African-Middle Eastern Medal with two bronze service stars, World War II Victory Medal, Korean Service Medal with one silver star, and the United nations Service Medal. After declining numerous offers to receive promotions, Jesse retired from active service on July 1, 1962 as a Master Sergeant E-7, to finish out his career serving his country in the Civil Service at Fort Leonard Wood, Missouri, where he could be with his wife and raise his son. Jesse married the love of his life, Norma Evelyn Hamilton, on January 1st 1949, whom he cherished until her passing on April 28, 2013. They shared over 64 years of marriage together, and were blessed with one son, Dwight, and many wonderful memories. In his spare time, Jesse enjoyed being outdoors. You could find him either hunting, fishing or working in his large garden. He loved watching the St. Louis Cardinal games and really enjoyed his grandchildren. He was very proud of their accomplishments and loved spending time with them. Jesse was a lifetime member of the Harry Herron DAV Chapter 49 and the Ozark Memorial VFW Post #3176 of St. Robert. Jesse passed away Wednesday, May 2, 2018 in the General Leonard Wood Army Community Hospital of Fort Leonard Wood, Missouri. He had attained the age of 99 years and would have turned 100 in just 22 days. He was really looking forward to his birthday celebration. He will be sadly missed, but fondly remembered by all those that knew and loved him. Jesse leaves to cherish his memory, two grandchildren: Gavin Deardeuff of St. Louis, MO and Allison Deardeuff of Kansas City, MO; daughter-in-law: Linda Deardeuff of Rolla, MO; three great grandchildren: Miles, Sam and Lincoln; dear friends and neighbors: Bob and Betty Belton; other relatives and friends. In addition to his parents and wife, Jesse was preceded in death by his son, Dwight Deardeuff. Services were held at 2:00 p.m. Monday, May 7, 2018 in the Memorial Chapels and Crematory of Waynesville / St. Robert with Pastor William Kempen officiating. The song “Amazing Grace” was played and serving as escorts were the United States Army. Burial with military honors followed in the Crocker Memorial Park Cemetery of Crocker, Missouri with honors being provided by the United States Army of Fort Leonard Wood, Missouri. Memorial contributions may be made in memory of Jesse Deardeuff and may be left at the funeral home.

MSGT (Ret) Jesse Wayne Deardeuff, son of the late Alpha A. and Gertie (Paulson) Deardeuff, was born May 24, 1918 near Crocker, Missouri where he grew up and attended Sweethome School #21. He then graduated Valedictorian from Crocker High School... View Obituary & Service Information

The family of MSGT (Ret) Jesse Wayne Deardeuff created this Life Tributes page to make it easy to share your memories.

MSGT (Ret) Jesse Wayne Deardeuff, son of the late Alpha A. and...