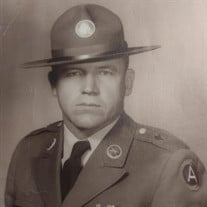 Jesse C. Martin, son of the late Rev. George W. and Ida Mae (Fail) Martin, was born October 7, 1940 in Statesboro, Georgia. In 1960, Jesse entered the United States Army and served his country faithfully until his retirement in 1980 after twenty years of service. He had attained the rank of First Sergeant and earned several awards and commendations; some of which include: Bronze Star Medal, Vietnam Service Medal with Six Service Stars, Republic of Vietnam Campaign Medal, Air Medal, Combat Infantryman Badge, National Defense Service Medal, Four Overseas Service Bars, Good Conduct Medal – 6th Award and Expert Qualification Badge (M-16). On June 8, 1971, Jesse was united in marriage to Patsy Darlene Fenton in Elizabethtown, New Jersey. They shared over 48 years of marriage together and were blessed with four children: Debra, Billy, Jesse and Jimmy. After retiring from the military, Jesse was employed as a car salesman in various dealerships in Georgia, Tennessee, Oklahoma, and Missouri. His last position was as Sales Manager at M&S Motors in St. Robert, Missouri with owner Tom Bohrer. In his spare time, he enjoyed reading, but most importantly, he loved spending time with his family and friends. Due to his health beginning to decline in 2000, he was not able to get out much, but he always looked forward to being able to spend time with his family. He loved them dearly and treasured his time with them. Jesse was a member of Grace Church in Rolla, Missouri. He went home to be with his Lord the morning of Tuesday, December 24, 2019 in his home having attained the age of 79 years. He will be sadly missed, but fondly remembered by all those who knew and loved him. esse leaves to cherish his memory, his wife: Patsy Martin of the home; four children: Debra Julian (Jim) of Lawton, OK, Billy Martin (Denise) of Niceville, FL, Jesse Martin, Jr. (Jennifer) of Broken Arrow, OK and Jimmy Martin (Rebekah) of Newburg, MO; seventeen grandchildren; thirteen great- grandchildren; two sisters: Naomi Williams of Charleston, SC and Ann Waite of the state of South Dakota; several nieces, nephews, other relatives and friends. In addition to his parents, Jesse was preceded in death by three brothers, one sister, and one grandson: Blake Martin. Graveside services with military honors will be held at 2:00 p.m. Friday, December 27, 2019 in the Missouri Veterans Cemetery of Waynesville, MO. Arrangements are under the direction of Memorial Chapels and Crematory of Waynesville / St. Robert. Visitation will be held from 1:00 p.m. until. 1:45 p.m. Friday, December 27, 2019 in the Memorial Chapels and Crematory of Waynesville / St. Robert. Memorial contributions may be made in memory of 1SG (Ret) Jesse Martin and may be left at the funeral home.

The family of 1SG (Ret) Jesse C. Martin created this Life Tributes page to make it easy to share your memories.