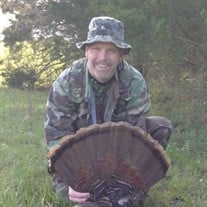 Jimmy Dean Reid, Jr., son of Jimmy Dean Reid Sr. and the late Carol Jean (Bass) Reid Davis, was born September 26, 1969 in Lebanon, Missouri. As a young boy, Jimmy grew up in the Richland and Laquey area and graduated from Laquey High School in 1987. After graduation, Jimmy entered the United States Marine Corp and served his country faithfully for five years, even serving in the Gulf War. He had attained the rank of Corporal and earned the Good Conduct Medal, National defense Service Medal, Southwest Asia Service Medal (Saudi Arabia) W/2 Stars, Kuwait Liberation Medal, Joint Meritorious Unit Award, Navy Unit Commendation, Sea Service Deployment Ribbon, Coast Guard Special Operations Service Ribbon, Certificate of Commendation and the Meritorious Mast. After his honorable discharge from the military, Jimmy went to work at Detroit Tool in Lebanon and worked his way up into management. He worked there until his health began to fail. On August 21, 1990, Jimmy married Sabrina Coots and to this union three children were born: Meagan, Clint, and Garrett. At an early age, Jimmy made an important decision in his life and accepted Jesus Christ as his Savior and was baptized. In his later years, he served as deacon at the Independence Baptist Church of Richland. In his spare time, Jimmy loved to be outdoors hunting and fishing. He was an avid gun enthusiast and was a life member of the NRA. He also very talented when it came to making homemade knives. He was a member of the Rocky Mountain Elk Foundation and the Francis J. Lynch VFW #3168 of Laquey. Jimmy’s greatest joy was spending time with his family. He loved his kids immensely and especially loved being a Papa to Violet Grace. He will be sadly missed by all those that knew and loved him. Jimmy went home to be with the Lord Sunday, October 26, 2014, in his home having attained the age of 45 years. Jimmy leaves to cherish his memory, his 3 children, Meagan Reid (Bart) of Richland, MO, Clint Reid of Springfield, MO, and Garrett Reid of Richland, MO; his granddaughter, Violet Grace Warren; his father and step-mother, Jimmy Sr. and Becky Reid of Richland, MO; 3 brothers, Tim Reid (Betsy) of Richland, MO, Dan Reid (Jessica) of Laquey, MO, Stony Reid of Richland, MO; 2 sisters, Melissa Childs (Chris) of Waynesville, MO and Clara Mallonee (Mike) of Versailles, MO; his girl- friend, Judy Fortner of Lebanon, MO; his life-long friend, Scott Franks of Waynesville, MO; and a number of nieces and nephews. Jimmy’s family would like to give a special thank you to Judy Fortner, Jimmy’s girlfriend, who has stood by him through his illness and has gone above and beyond duty to care for him. Funeral services were held at 11:00 a.m., Thursday, October 30, 2014 in the Independence Baptist Church, Richland, Missouri with Bro. John Dinwiddie officiating. Recorded music selections included “Thank You”, “Never Alone”, “Amazing Grace” and “I Can Only Imagine.” Serving as escorts were Tim Reid, Dan Reid, Stony Reid, Bart Warren, Chris Childs and Ethan Finger. Burial with Military Honors followed in the Hazelgreen Cemetery, Laclede County, Missouri. Services were under the direction of Memorial Chapels of Richland. A memorial has been established in memory of Jimmy Dean Reid, Jr. and contributions may be left at the funeral home.

The family of Jimmy Dean Reid, Jr. created this Life Tributes page to make it easy to share your memories.