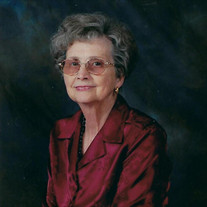 Joan (Scott) Quesenberry, daughter of the late Dorsie Bryan Scott and Mildred Haley (Hudgens) Scott, was born January 16, 1934 in St. Robert, Missouri. She passed away Friday, September 11, 2020 in her home at the age of 86 years. At the age of six, Joan accepted God’s gift of Jesus and began trying, daily, to live in a way that pleased her Savior. She was a long-time member and pianist of the Fairview Baptist Church near Laquey, Missouri. Joan grew up in Gospel Ridge until the age of nine. Then she and her family moved to Richland where she attended church, school, worked in the Richland MFA, and later married Bobby Quesenberry. At the age of 18, Joan moved to St. Louis, Missouri. After eight years of living in St. Louis, she moved back to Laquey where she remained until 2000; at that time she moved back ‘home’ to Richland. Joan then met and maintained a close boyfriend, Bob Groat. She enjoyed all her friends at the senior center. Joan was blessed with five children: Linda, Janis, Snowden, Mark, and Kelly. After her faith, the most important priority to Joan was her family. She was an encourager, and wonderful example of Jesus’ love, patience, kindness, faithfulness, and self-control. Joan loved her family dearly and was always looking out for their best interest and interceding for them in prayer. She worked on Fort Leonard Wood for 15 years where she sewed on stripes, name badges, etc. In her spare time, she enjoyed reading, sewing, quilting, genealogy, writing stories, traveling, and playing the piano. She was a member of the Friends of the Library. Joan was always playing tricks on people and making jokes. Many times she’d said, “I just like to make people laugh by being silly!” Her happiest and silliest years, by far, were spent with Bob Groat. They attended every type of music event available, walked in the park and floated the river together. She played Scrabble every chance she could. Joan will be missed, but fondly remembered by all those who knew and loved her. She leaves three children: Linda Scott (Bob) of Waynesville, MO, Janis Adams (Brian) of St. Robert, MO and Kelly York (Joe) of Laquey, MO; three siblings: Dorsie (Sonny) Scott (Sue) of Richland, MO, Mary Hayes (Nelson) of Kansas City, MO and Joyce Moore (Charles) of Lebanon, MO; longtime boyfriend: Bob Groat of Richland, MO; eight grandchildren; eleven great grandchildren; several nieces, nephews, other relatives and friends. In addition to her parents, Joan was preceded in death by two sons: Snowden Brian (passed away as an infant) and Mark Quesenberry; one grandson: Mark Anthony Quesenberry (Mark’s son); two brothers: William Scott and Harvey Scott; and one sister: Beulah York. Funeral services were held at 2:00 p.m. Monday, September 14, 2020 in the Memorial Chapels and Crematory of Waynesville / St. Robert with Pastor Danny Graves officiating. The songs “This Is Just What Heaven Means to Me”, “If We Never Meet Again” and “Go Rest High on that Mountain” were played. Serving as escorts were Bob Scott, Brian Adams, Joe York, Nick York, Jed York, and Ben York. Serving as honorary escorts were Jennifer Pritchett, Bill Pritchett, Caleb Quesenberry, Tom Wilson, and Jordan York. Burial followed in the Fairview Cemetery of Laquey, Missouri.

Joan (Scott) Quesenberry, daughter of the late Dorsie Bryan Scott and Mildred Haley (Hudgens) Scott, was born January 16, 1934 in St. Robert, Missouri. She passed away Friday, September 11, 2020 in her home at the age of 86 years. At... View Obituary & Service Information

The family of Joan Scott Quesenberry created this Life Tributes page to make it easy to share your memories.