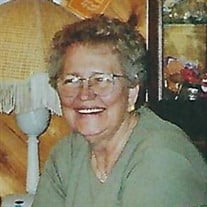 Joan May Stafford, daughter of Roy Robert Gibson and Thelma (Falkenrath) Gibson, was born April 26, 1940 in Devils Elbow, Missouri. Joan’s father, Roy, worked for the highway and helped build I-44, so the family lived in several different places while Joan was growing up. She attended high school in Newburg, Missouri. Joan met a young man by the name of Marvin Leroy Stafford at Idumea Baptist Church during a Bible School commencement. They were united in marriage on December 21, 1956 in Camden County, Missouri and shared 48 years of marriage together before Marvin preceded her in death in 2004. They were blessed with three daughters: Pamela Joan, Kimberley Sue, and Brenda Lee. At the age of 17, Joan made a profession of faith at the Idumea Baptist Church of Laquey and was baptized in the Gasconade River. She was a faithful member of the church for more than 60 years and served by teaching Bible School, working in the kitchen, or wherever else she was needed until the last few years when her health began to decline. Joan worked hard to care and help provide for her family. She worked at elections for several years, was fill in cook at the Laquey school, worked for 7 1/2 years at Life Care Center of Waynesville as a housekeeper and after leaving Life Care, she began working as a home health caretaker, which she did for several years until her health caused her to have to retire. In 2008, Joan’s sister, Alice, donated a kidney to Joan. Joan’s health began to improve, and she was able to have a few more years of health, due to the generosity of her sister. Joan was a homemaker, loved cooking (even baking special cakes for her girl’s birthday parties), and taking care of her family. She enjoyed working out in her yard with her flowers, fishing, sewing, quilting, working with ceramics, listening to classical music, and watching ballet. Joan was the ultimate NASCAR fan and enjoyed cheering on her favorite driver, Carl Edwards. She even received a picture with well wishes written to her from Carl himself one of the times she was in the hospital. Joan also enjoyed hosting Tupperware parties, baby showers, etc. with all the ladies in the neighborhood and cooking all the food associated with those parties. She was the best hostess and always had a smile on her face. She loved her family and enjoyed spending time with them whenever she was able. While Marvin was still alive, Joan and he did a lot of traveling to historical places, flea markets, and when he sang and played guitar as one of the Idumea Travelers Gospel Group. Joan went home to be with her Lord Saturday, January 30, 2021 in the Lake Regional Hospital of Osage Beach, Missouri having attained the age of 80 years, 9 months, and 4 days. She will be sadly missed, but fondly remembered by all those that knew and loved her. Joan leaves to cherish her memory, two children: Pamela J. Stafford of Laquey, MO and Kimberley S. Tudor (Ray) of Buckhorn, MO; two grandchildren: Kayla Miller (Steven) of Phillipsburg, MO, and Chandler Tudor (Sarah) of Richland, MO; one great granddaughter: Ellis; one brother: Billy Gibson (Carolyn) of Rockwood, TN; one sister: Alice Gibson (Janet) of Lake City, FL; several nieces, nephews, other relatives, and friends. In addition to her husband, Joan was preceded in death by her parents: Roy and Thelma Gibson; infant daughter: Brenda Lee Stafford; and four siblings: Leroy Gibson, Wanda Jacoby, Dianna Kelsey, and Freddie Gibson. Joan was a strong and active woman who survived kidney failure and transplant, heart surgery, cancer (twice) and a broken hip. But through it all, she kept her faith and kept fighting until the Lord called her home. Her tenacious spirit, strong will and faith, will live on in our hearts until the day we are all reunited again. Services were held at 1:00 p.m. Wednesday, February 3, 2021 in the Memorial Chapels and Crematory of Waynesville / St. Robert with Pastor Danny Graves officiating. Billy Gibson, Joan’s brother, recalled his wonderful memories of Joan. The songs “Go Rest High on that Mountain” and “In the Garden” were played. Serving as escorts were Shon Jacoby, Marvin Gan, Chandler Tudor, Steve Kelsey, Steven Miller, Ray Tudor, and Gregory Stafford. Burial followed in the Idumea Cemetery of Laquey, Missouri. Memorial contributions may be made in memory of Joan Stafford to the Idumea Cemetery Fund and may be left at Memorial Chapels and Crematory of Waynesville / St. Robert.

Joan May Stafford, daughter of Roy Robert Gibson and Thelma (Falkenrath) Gibson, was born April 26, 1940 in Devils Elbow, Missouri. Joan&#8217;s father, Roy, worked for the highway and helped build I-44, so the family lived in several... View Obituary & Service Information

The family of Joan May Stafford created this Life Tributes page to make it easy to share your memories.