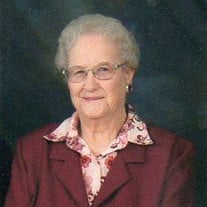 JoAnn Edith Beasley, daughter of John and Pearl Irene (McDaniel) Henson, was born May 14, 1929 in Laclede County, Missouri. The family moved to Oklahoma for a short time when JoAnn was just a youngster; later moving back Richland where she lived her entire life. JoAnn graduated from Richland High School and soon began working at Burds Café in Richland. She also worked at the Care Center, school and the old H.D. Lee factory as a cook. On July 23, 1949, she was united in marriage to the love of her life, Dale Beasley in Baxter County, Arkansas, and to this union five children were born, Jack, Mary Ann, John “Rick”, Becky and Brenda. Together they shared over forty three years of love and laughter together before Dale’s passing on March 22, 1993. JoAnn professed her faith in Jesus Christ as a young girl and was a faithful Charter member of Grace Baptist Church, formerly known as, Grace Mission Church and was baptized by Pastor Barney A. Brown. JoAnn loved her Lord and was a faithful witness for Him throughout her life. She served in her church over the years, whether teaching a Sunday school class, or helping with the children in AWANAS. She often brought smiles to several faces when she’d sing, Whispering Hope; a song she and her mother would sing together. JoAnn loved her family dearly and was a devoted homemaker. She found great joy in spending time with them, especially her grandchildren and great-grandchildren; they were her pride and joy. JoAnn was also a wonderful cook and one of her favorite things to do was read recipe books. She also enjoyed gardening, canning and watching the birds; especially the red birds. JoAnn began her eternal journey with her Lord on the morning of Thursday, May 25, 2017, in the Lake Regional Hospital in Osage Beach, Missouri, surrounded by her loving family having attained the age of 88 years. JoAnn leaves to cherish her memory her four children, Mary Ann Nelson (Mike), John “Rick” Beasley (Dawn) and Becky Beasley all of Richland, MO and Brenda Burton (Darrin) of Crocker, MO; seven grandchildren: Kerry Brown (Antonio), Michael Nelson (Joyce), Kristi Atkins (Matt), Traci Medlen (B.J.), Fred Brown (Terri), Jason Brown and Benny Burton (Tina); sixteen great-grandchildren; three great-great grandchildren; nieces, nephews, and a host of other relatives and friends. JoAnn was preceded in death by her parents, her beloved husband, Dale on March 22, 1993, one son, Jack Beasley on September 30, 2014 and her brother, Gene Henson. JoAnn was a loving devoted daughter, wife, mother, grandmother, great-grandmother, sister and friend. She lived her life with a loving gentle spirit, ready to greet anyone with her sweet smile and a gentle hug. She will be missed greatly, but her memory will live on in our hearts forever. It has been said, “What we have once enjoyed, we can never lose.” So today we celebrate JoAnn’s life; a life well lived and will treasure each memory made with her. Until we meet again, we love you! A Celebration of Life service was held at 2:00 p.m., June 2, 2017 in Grace Baptist Church, Richland, Missouri with Pastor Rocky Harris officiating. Matt Atkins sang, “Sweet Beulah Land” and “Go Rest High on That Mountain”; other favorite recordings included “Sissy”, “Angels Among Us” and “Dancing With Angels.” Family and friends shared special thoughts and fond memories of JoAnn. Inurnment will be in the Wair-Dowty Chapple Cemetery near Richland, Missouri. Arrangements were entrusted to Memorial Chapel of Richland. Memorial contributions may be made in memory of JoAnn Beasley and may be left at the funeral home. Online condolences may be made at www.memorialchapelsandcrematory.com

JoAnn Edith Beasley, daughter of John and Pearl Irene (McDaniel) Henson, was born May 14, 1929 in Laclede County, Missouri. The family moved to Oklahoma for a short time when JoAnn was just a youngster; later moving back Richland where she lived... View Obituary & Service Information

The family of JoAnn E. Beasley created this Life Tributes page to make it easy to share your memories.