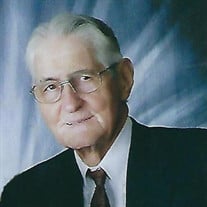 Joe D. Miller was born at home in Hoopeston, Illinois on December 29, 1927; the only child of Oakley and Ruby Forrest Miller. He grew up in Hoopeston, a beautiful farming community located in Northeastern Illinois. It was here he developed a strong work ethic by pig tailing his parents as they operated their dairy, poultry, hog, and produce businesses. Life was tough in those post- depression years, and when he was five years old, his dad lost his job with the railroad. It was then they purchased their first dairy cow and began their journey into dairy farming. As a young child he would get up with his dad about 4 to 5 a.m. every morning to milk cows, and then deliver milk, cream, butter, and cottage cheese to their customers. At the end of the school day, he headed home once again to milk cows. Adding to this responsibility, his parents branched out into raising chickens, hogs, and selling vegetables from their gardens. They worked 365 days a year with no vacations for many, many years. The entrepreneurial spirit was deeply ingrained in him. Even as a child he would make slingshots and kites to barter or sell. Despite the hardships, he often reminisced about his childhood in a longing and happy way. His faith and relationship with Christ was established at an early age when he and his parents were members of the First Baptist Church in Hoopeston. This foundation supported him and gave him strength throughout life's ups and downs. In 1945, Joe graduated from John Greer High School, and afterwards joined the Illinois National Guard. Upon completing that commitment, he returned to Hoopeston to work in the retail business. Drafted by the Army during the Korean War, he arrived in the night on a troop train in Newburg. While stationed at Fort Leonard Wood, Joe met the love of his life, Lois Cross, on a dance floor. Their shared love of ballroom dancing, faith, very similar childhoods, and even the same middle name, led them to marry February 14, 1953 at Bray' s Advent Christian Church in Iberia. To this union were born four daughters and a life-long commitment of support and devotion to each other and family. In 1954, Joe transitioned from military life to civilian life by selling insurance. In 1960, he obtained a broker's license to sell real estate and began Miller Realty. Downtown Waynesville was the location of his office, his "second" home, and he maintained an active presence there until his death. He loved his work, and people, never meeting a stranger. The key to success in life was to treat everyone the way you would like to be treated he would often say. Joe and Lois were active members of First Baptist Church in Waynesville in the 1950's until they decided to join a mission church in West Waynesville, now known as Westside Baptist. Joe was an active member and usher there until health issues forced him to step back. Every Sunday morning and evening, and Wednesday night, he would be there helping wherever he was needed. Joe loved the Waynesville-St. Robert Area, and supported the community as a member of the Chamber of Commerce, Committee of 50, American Legion, Shriners, Masonic Lodge, President of PTA, Pulaski County Board of Realtors, Baptist Camp Board Member and President, Lions Club member and was a charter member of First State Bank. Joe loved his church, his work, visiting and telling stories of his past, and time spent with his children, grandchildren, and great grandchildren. He often stated, "If you have a loving family you are wealthy." Joe is survived by his wife, Lois, daughters Sherye Sharp (husband Lynn}, Judy Miller Redmond, Mary Miller, Nancy Berry (husband Kevin}. Seven grandchildren: Christy Descovich (husband Chris), Lora Sharp, Rebecca Renee Guidry (husband Mike), Robert Ryan Redmond (wife Christy), Mary Catherine Miller, Katharine Moisan (husband Forrest), and Jennifer Berry. Joe is blessed with 10 great grandchildren, which are mostly girls. He would say, "I take care of Lois first, and then it is one woman at a time." Special mention is in order for his first cousin, Phil Sandidge (wife Bev) as he was like a brother to him. When Daddy reminisced about his life, he said he had truly been favored by God to have a loving family and wonderful friends. He loved his family, friends, vanilla lattes, and living in Waynesville. Joe will be sadly missed by all that knew him. Our loss is heaven's gain and Daddy's reward. Keep in touch, Daddy. We love you so much and we'll see you later! Graveside services with military honors were held on Saturday, November 14, 2020 in the Waynesville Memorial Park Cemetery of Waynesville with Pastor Bill Dudley and Pastor Lindell Shelden officiating. Becky Lercher sang “How Great Thou Art” and “In the Garden”. Serving as escorts were Lynn Sharp, Ryan Redmond, Danny Graves, Lyle Cox, Kevin Berry, and Joe Hunter. Services were under the direction of Memorial Chapels and Crematory of Waynesville / St. Robert. Memorial Contributions in memory of Joe Miller can be made to the Westside Baptist Church, and contributions can be left at the funeral home.

Joe D. Miller was born at home in Hoopeston, Illinois on December 29, 1927; the only child of Oakley and Ruby Forrest Miller. He grew up in Hoopeston, a beautiful farming community located in Northeastern Illinois. It was here he developed a... View Obituary & Service Information

The family of Joe Dean Miller created this Life Tributes page to make it easy to share your memories.

Joe D. Miller was born at home in Hoopeston, Illinois on December...