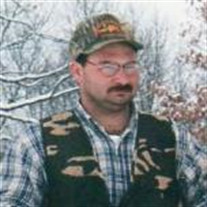 Joel Bradley “Brad” Ledbetter, son of Kent and Joyce (Mitschele) Ledbetter, was born December 24, 1974 in Springfield, Missouri. He passed away Friday, December 21, 2018 in Dunn County, North Dakota having attained the age of forty-three years. Brad grew up on the family farm just north of Richland and attended school, graduating with the Class of 1993 at Richland High School. He continued his education by attending college at Crowder College and Southwest Missouri State in Springfield, Missouri. As a child, Brad attended church at the First Christian Church of Richland and recently, when possible, he attended services with his family at the Church of Christ in Swedeborg. Over his lifetime, he held many positions; farm manager, farm implement sales, construction, concrete work, and most recently he drove trucks in the oil fields of North Dakota. However, Brad was a self-proclaimed entrepreneur. His dreams were always larger-than-life, just like his personality. He loved the local fairs and area livestock shows where he was actively involved in all aspects and the center of activities. His competitive nature was contagious as was his laughter. In his spare time, Brad enjoyed being outdoors while hunting, fishing, wagon master and spending time with his mules and Border Collie dogs. He loved to spend time with his family whenever he was able. Brad was a member of the Waynesville Masonic Lodge #375 AF & AM and the Waynesville / Ft. Wood Shrine Club. Brad will be sadly missed, but fondly remembered by all those that knew and loved him. He leaves to cherish his memory, his parents: Kent and Joyce Ledbetter of Richland, MO; two daughters: Kaitlin (Vern) and Morganne (Little Biscuit) Ledbetter and their mother, Becky Proctor, all of the home; one brother: Brian Ledbetter of Oskaloosa, KS; nieces: Elizabeth Begley of Lebanon, MO and Paige Ledbetter of Richland, MO; special aunt and uncle: Dennis and Judy Lambeth of Richland, MO and a special aunt Berta Ogle of Lebanon, MO; along with several aunts, uncles, other relatives and friends. Brad was preceded in death by his grandparents: Pauline Mitschele and Luther and Ruth Ledbetter. Brad will be deeply missed however; his legacy will live on through his precious daughters and family. He lived his life to the fullest and Brad would want you all to do the same! Services were held at 7:00 p.m. Thursday, December 27, 2018 in the Memorial Chapel of Richland, Richland, Missouri with Pastor Lee Todd officiating. Favorite music selections included “House That Built Me,” “Lead Me Home,” and “Cowgirls Don’t Cry.” Serving as escorts were Nick Nickels, Paul Laughlin, Clinton Jarrett, Ben Anderson, Coleman Gan, John Gan IV, John Gan III and Tim Hargus. Honorary escorts included Gregory Cantrell, Jimmy Brackett, Bruce McDaniel, Brian Miller, James Sullivan, Kent Gan, Bob Williams, Bill Crossland, Steve Pendleton and Steve Maddux. Burial was in the Ledbetter Family Farm near Richland, Missouri. Services were under the care and direction of Memorial Chapel of Richland. Memorial contributions may be made in memory of Brad Ledbetter and may be left at Memorial Chapel of Richland.

The family of Joel Bradley "Brad" Ledbetter created this Life Tributes page to make it easy to share your memories.