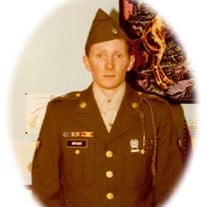 John Starrett Bryant, Jr., son of John S. Bryant, Sr. and Nancy Emaline McCall, was born January 26, 1960 in Fort Bragg, North Carolina. Due to his father being in the military, John and the family was transferred several times during his growing up years. He graduated from Belfast Area High School in Belfast, Maine. Shortly after graduation, John himself entered the United States Army and served his country faithfully for over 20 years and attained the rank of Sergeant First Class. He earned several awards and commendations and spent time in Germany, Alaska and retired from Fort Campbell, Kentucky. In January of 1999, John moved to the Fort Leonard Wood, Missouri area. He continued serving his country as a civil service employee for 10 years; first starting with the Motor Pool as a dispatch, then went to work at the hospital as a Transportation Officer. On March 26, 2002, John was united in marriage to Christa Ursula Thamm in St. Robert, Missouri. They shared over 15 years of marriage together and many wonderful memories. In his spare time, John enjoyed bowling and being outside enjoying nature, whether it was fishing or barbequing for the family. He loved spending time with his family, especially his grandson. John passed away Monday, August 21, 2017, in the Missouri University Hospital in Columbia, Missouri having attained the age of 57 years. He will be sadly missed, but fondly remembered by all those that knew and loved him. John leaves to cherish his memory, his wife, Christa of the home; two children, Kevin Lilley of Austin, Texas and Shawn Lilley (Brittany White) of Marble Falls, Texas; two grandchildren, Maliki Lilley and Kymmie White; his father, John S. Bryant, Sr. of Swanville, Maine; his mother, Nancy McCall of Goodlettsville, Tennessee; a sister, Teresa Goodwin (Stephen) of Goodlettsville, Tennessee; a brother, Samuel Bryant of Melrose, Massachusetts; one niece and two nephews; as well as a host of other relatives and friends. Services with military honors were held at 1:00 p.m. Saturday, August 26, 2017 in the Memorial Chapels and Crematory of Waynesville / St. Robert. The songs “I Don’t Want To Miss a Thing” and “Enter Sandman” were played. Military honors were provided by the United States Army of Fort Leonard Wood, Missouri. Memorial contributions may be made in memory of John Bryant and may be left at the funeral home.

John Starrett Bryant, Jr., son of John S. Bryant, Sr. and Nancy Emaline McCall, was born January 26, 1960 in Fort Bragg, North Carolina. Due to his father being in the military, John and the family was transferred several times during... View Obituary & Service Information

The family of SFC (Ret) John S. Bryant Jr. created this Life Tributes page to make it easy to share your memories.