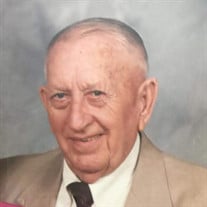 John Dale Collier, son of the late John Oliver and Mary Roberta (Elms) Collier, was born August 1, 1920 in Cullen Township, Missouri. As a young boy, John Dale grew up in Mossy Spring, Missouri where he attended school. In 1960, John Dale met Georgia Jaunita Adkins and they were married on April 18, 1960 in Waynesville, Missouri. In September 1962, John Dale and Jaunita adopted a son, Kimmey Dale Collier and they raised him on the six acres they purchased in Buckhorn. John Dale was a hardworking man and in his younger years he owned and operated a turkey farm outside of Sedalia, Missouri until a tornado came through and destroyed the operation. He then began driving a commercial bus from Waynesville, Missouri to Cedar Rapids, Iowa. He served as the president of the Teamsters Local 864 in Rolla, Missouri. John Dale was a member of Harmony Baptist Church in Waynesville for many years and attended faithfully until his health began to decline and he Jaunita moved into Life Care Center of Waynesville in 2016. John Dale and Jaunita loved to do things together and their passion was camping. They went camping every chance they could and John Dale also enjoyed fishing. He loved spending time with his family, especially the grandchildren and looked forward to their visits. John Dale passed away Friday, July 13, 2018 in the Life Care Center of Waynesville having attained the age of 97 years. He will be sadly missed, but fondly remembered by all those that knew and loved him. John Dale leaves to cherish his memory, his son, Kimmey Collier and wife, Sonia of Niangua, MO; twelve grandchildren, eight great-grandchildren, and six great-great-grandchildren; as well as a host of other relatives and friends. In addition to his parents, John Dale was preceded in death by his wife, Jaunita Collier; one brother: Clyde Collier; and one sister: Ada Collier. Graveside services were held at 11:00 a.m. Friday, July 20, 2018 in the Waynesville Memorial Park Cemetery of Waynesville with Pastor Danny Graves officiating. Services were under the direction of Memorial Chapels and Crematory of Waynesville / St. Robert.

The family of John Dale Collier created this Life Tributes page to make it easy to share your memories.