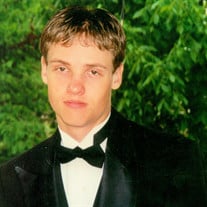 John Wesley “JW” Connors, son of John Thomas Connors III and Juanita (Peeler) Connors, was born August 2, 1984 in Waynesville, Missouri. JW, as he was called by his friends and family, grew up in Pulaski County and continued to reside here after graduating from Dixon High School in 2003. JW worked several jobs in the St. Robert area, but his true trade was as a painter, a trade he proudly learned at his father’s side while they both worked at Bales Construction. In his spare time, he enjoyed being outdoors while hunting, fishing, camping, and playing golf. He loved motorcycles, especially Harley Davidsons. He enjoyed music and playing the guitar. Most importantly, he loved spending time with his family and he was blessed with two children whom he loved dearly, John Anthony and Bella Marie. JW passed away Monday, November 24, 2014 in the Mercy Hospital of Springfield, Missouri having attained age of 30 years, 3 months, and 22 days. He will be sadly missed but fondly remembered by all those that knew and loved him. JW leaves to cherish his memory his parents: John Thomas Connors III and Juanita Connors of Waynesville, MO; two children: John Anthony Connors and Bella Marie Connors, both of Dixon, MO; one sister: Sharon Kay Connors of Richland, MO; maternal grandparents: Sam Bryon and Rosa Peeler of Waynesville, MO; three nieces: Dana Connors, Ashley Boseke and Torey Medlock; one nephew: Ryan Connors; several other relatives and friends. JW was preceded in death by his paternal grandparents: John T. Connors II and Ella Mae Connors. Services were held at 6:30 p.m. Saturday, November 29, 2014 in the Memorial Chapels and Crematory of Waynesville / St. Robert with Rev. Christopher Hendrix officiating. The songs “Beautiful Boy” by John Lennon, “Knockin’ On Heavens’ Door” by Bob Dillon, “Sweet Child of Mine” by Guns & Roses and “Hurt” by Johnny Cash was played. Memorial contributions may be made in memory of JW Connors and may be left at the funeral home.

John Wesley &#8220;JW&#8221; Connors, son of John Thomas Connors III and Juanita (Peeler) Connors, was born August 2, 1984 in Waynesville, Missouri. JW, as he was called by his friends and family, grew up in Pulaski County and continued... View Obituary & Service Information

The family of John Wesley "JW" Connors created this Life Tributes page to make it easy to share your memories.