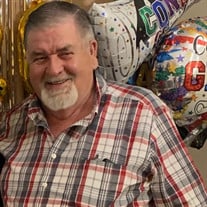 John Lilburn Gan, son of John Lilburn Gan, Sr., and Polly Ann (Gann) Gan was born August 4, 1938 in Bloodland, Missouri. As Fort Leonard Wood became established, the family moved to the Colley Hollow area and John attended school in a little one room schoolhouse in the Buckhorn area. On January 20, 1957, married the love of his life, Bessie “June” Holcomb in Richland, Missouri, and together they shared over sixty-three years together. John and June loved one another deeply and were totally devoted to one another. Soon God began blessing their home with four children, Pam, Johnny, Sheila, and Kent, filling their home with great joy, laughter, and love throughout the years. John worked in St. Louis for McDonald Douglas a few years, before working at Fort Leonard Wood as a truck driver, retiring in 1972. He and June then moved to Richland after purchasing their beloved farm of that same year. To say John loved his family, was an understatement. He adored them; loving them completely and unconditionally always enjoying each, and every moment spent with them. He was such a wonderful Grandpa, and his beloved grandchildren were the apple of John’s eye. John also enjoyed raising beef cattle and fattening them out to send to the stockyards. He’d stop by MFA to not only get his feed, but chit-chat with his friends and neighbors gathered there. John loved being outdoors hunting and fishing. In John and June’s younger days, the happy couple loved to square dance anytime, and anywhere. He was a member of Richland’s Masonic Lodge for many years. John went home to be with the Lord Saturday, October 17, 2020 in Osage Beach, Missouri, having attained the age of eighty-two. He was preceded in death by his parents, two sisters, Frona Mae Gan and Lela “June” (Gan) Basham, one brother Bobby Gene Gan. John leaves behind to cherish his memory his loving wife, June Gan of the home; four children: Pam Dunbar (Bill), Johnny Gan, Sheila Brackett (Jimmy) and Kent Gan (Kathy), all of Richland, MO; six grandchildren; six great grandchildren; one brother: Norman Gan (Karen) of Richland, MO; one sister: Annalee Nesbitt of Clarksville, TN; one brother-in-law: Clarence Basham of Waynesville, MO; several nieces, nephews, other relatives and friends. We will remember John for many reasons, but certainly for his big heart and love of family. His legacy will live on in the lives of those who knew and loved him. Services were held at 2:00 p.m., Friday, October 30, 2020 in the Memorial Chapel of Richland with Pastor Richard Breeden officiating. Gilbert Crismon shared stories and memories. Songs “Grandpa,” “When I Get Where I’m Going,” and “Wish Grandpa’s Never Died” were played. Scotty McMahon, Melvin Ellett, Leonard Shelton, Jerry Henry, Coleman Gan, and Bill Dunbar served as escorts. Honorary escorts included Kent Gan, Norman Gan, Clarence Basham, Johnny Gan III, Jimmy Brackett, and John Lilburn IV. Burial followed in the Buckhorn Cemetery, Buckhorn, Missouri. Services were under the care and direction of Memorial Chapel of Richland.

The family of John L. Gan created this Life Tributes page to make it easy to share your memories.