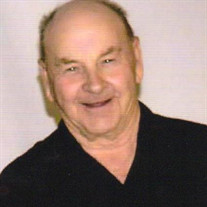 John Henry Holloway was born to James Delbert and Clara Newell Holloway on their farm near Richland, Missouri on November 28, 1941 where he was raised. As a young man John briefly worked at Dixon Shoe Factory before being drafted into the United States Army in 1963 where he earned his G.E.D. He was stationed at Ft. Leonard Wood, Missouri and faithfully served his country in the Vietnam War. John was awarded the expert (Rifle M-14) award. After his honorable discharge he returned to the shoe factory for a few years. He dated Gloria Jean Looney and on March 28, 1964, Easter weekend, they were united in marriage. Of that marriage was born three children: Judy Ann, Janet Lynn, and John Allen. John was a member of Elm Grove Baptist Church near Richland, Missouri. He went home to be with his Lord on September 8, 2018 at Mercy Hospital in Lebanon, Missouri having attained the age of seventy six years surrounded by his loving family. He was welcomed to the Kingdom of Heaven by his son, John Allen, who preceded him in death. John spent most of his life doing what he loved- working with his hands doing construction. He had a hand in building or remodeling almost every house in Richland during his career in construction. He began what ended up being another career with the Richland School District as a bus driver and maintenance supervisor. He retired from the school district after approximately 30 years of service. In John’s spare time his other hobbies and interests included woodworking, collecting tools, and puzzles. John was preceded in death by his parents, three brothers: Walter, Charles, and Junior Holloway and three sisters: Clara Mae Myers, Joan Mitschele, and Fonnie Mitschele. John leaves to cherish his memory his loving wife of 54 years, Gloria Holloway of the home; two daughters: Judy Walters (Jim) of Richland, MO and Janet Locklar (Scott) of Midland, TX; nine grandchildren: Robyn Hall of Midland, TX, John Eric Holloway (Virginia) of Republic, MO, Blake Pavelich of Stoutland, MO; Bryce Pavelich of Lebanon, MO, Kelsey Howell (Ross) of Midland, TX, Brandon Pavelich of Denver, CO, Garrett Holloway of Stoutland, MO, Nathaniel Henson of Richland, MO and Joshua Walters (Christen) of Richland, MO; five great grandchildren: Alexia Shay Hall, Alexander Alyn Hall, Malichi Lee Howell, Allison Nicole Howell, and Guinevere Marie Lorene Walters; two brothers: Paul William Holloway (Joyce) of Adrian MO and Robert Wayne Holloway (Gloria) of Richland, MO; one sister Mary Lou Henson of Richland, MO; along with lots of extended family and friends. It’s difficult to sum up a person’s life in just a few sentences. However, if you knew John, you knew how talented and creative he was. You knew he was a gentle, kind hearted loving, man – a man deeply devoted to his family and a loyal friend to all. John enjoyed life and never met a stranger. He would always have a good time. John’s presence here on earth will be greatly missed. Services were held at 10:00 a.m., Wednesday, September 12, 2018 in the Memorial Chapel of Richland funeral home with Pastor Durwin Kicker officiating. Favorite music selections included “Dancing with Angels,” “Why Me Lord,” “One More Day,” and “When We All Get To Heaven.” Serving as escorts were Charles Henson, Robbie Holloway, Jared Holloway, Russell Holloway, Mike Holloway and Rex Wall. Honorary escorts were Larry Looney, Scott Locklar, Jimmy Walters, John Holloway, Blake Pavelich, Bryce Pavelich, Brandon Pavelich, Garrett Holloway, Nathaniel Henson and Joshua Walters. Burial with military honors were provided by Missouri Honors Team of Rolla and the American Legion Post 240 of Richland in the Elm Grove Cemetery near Richland, Missouri. Services were under the care and direction of Memorial Chapel of Richland. Memorial contributions in memory of John Holloway may be left at the funeral home.

John Henry Holloway was born to James Delbert and Clara Newell Holloway on their farm near Richland, Missouri on November 28, 1941 where he was raised. As a young man John briefly worked at Dixon Shoe Factory before being drafted into the... View Obituary & Service Information

The family of John Henry Holloway created this Life Tributes page to make it easy to share your memories.