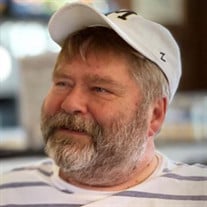 John Jarrett died exactly as he would have wanted to, playing bridge and eating food his doctors told him not to, with his girlfriends. John was born in Springfield, MO on August 20, 1956. He spent 3 years as a young child living in Germany with his mom and step-dad. They lived on the economy above the local bakery. The baker adopted little Johnny and taught him some German and baking. For the rest of his life he enjoyed using his elementary German at any opportunity and even diabetes couldn’t diminish his love of baked goods. John graduated from Waynesville High School in 1974. He was everybody’s favorite dance partner. He went to University of Missouri Columbia and graduated with a degree in secondary education and later earned his masters as well. John started working at a young age, serving truckers and late-night diners at Champlin’s Truck Stop. He knew what it took to give good service and was known to tip well. He made friends with servers and was a regular at the West Side Cafe and the Hub. He often talked about opening his own restaurant, but was probably better suited to hobby catering for friends and family. He spent most of his career as a social studies teacher in the Waynesville R-6 school district, retiring in 2010. He used to grow a beard for the start of school so he would look more tough and serious, but it was hard to hide his true nature. He loved his students and especially the 8th grade trips he would take to Washington DC. The students could hardly keep up with his “Washington Walk.” John liked to keep things interesting and took time away from teaching to explore other ventures over the years. He sold real estate, worked as outside sales for Columbia Florist Supply, and sold books at different times. He and Ann also owned and operated the Sears Catalog store in St. Robert for many years. He and Ann were true partners, each one supporting the other in their professional paths over the years. John was a member of the Pulaski County Democrats. His Republican friends mostly didn’t hold it against him. He loved history and served a term as president of the Old Stagecoach Stop Foundation. While he and Ann owned the Sears store, John was active in the local Chamber of Commerce. For several years, he served as the Deacon for Education at the Rolla Church of Christ. He and Ann were nominated for Citizen of the Year the same year, but Ann won the award. He joked that it was only fair since he had defeated her in high school for student body president. John always said the only reason he had kids was so he could have grandkids. He couldn’t have been happier with his four grandchildren. Whether playing in the pool or sneaking off for ice cream, Pop Pop knew how to have a good time. John was truly interested in people and loved to make a connection, sometimes uncomfortably so. He would feed you whether you wanted to eat or not. He was always there for a friend and never met a stranger. You always knew when John Jarrett was in the room, either because you heard him laughing or crying (he was never afraid to show his feelings) or because you smelled his signature Polo cologne. He lived big and loved big. The world is a little dimmer without him in it. John is survived by his wife of 43 years, Ann, of the home; two children: Jessicca Moore (Marcus) of Petaluma, CA, and Clinton Jarrett (Lisa) of Laquey, MO; four grandchildren; Tyler Jarrett, Blake Jarrett, Jonas Moore, and Elaine Moore; one sister: Lisa Mills (Matt) of Richland, MO; nieces, nephews, other relatives, and friends. He is preceded in death by his parents, Waylene Reavis and Rollin Jarrett, and step-mother Hattie Jarrett. Memorial contributions may be made in memory of John Jarrett to the Old Stagecoach Stop Foundation, Mt. View Cemetery Fund, or the Pulaski County Fair Board and may be left at the funeral home.

John Jarrett died exactly as he would have wanted to, playing bridge and eating food his doctors told him not to, with his girlfriends. John was born in Springfield, MO on August 20, 1956. He spent 3 years as a young child living in Germany... View Obituary & Service Information

The family of John Wayne Jarrett created this Life Tributes page to make it easy to share your memories.

John Jarrett died exactly as he would have wanted to, playing...