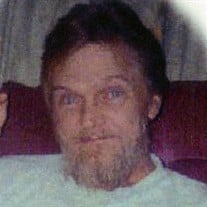 John William Johnson, son of the late Earl William and Phyllis Virginia (Sousley) Johnson, was born August 28, 1960 in Boone County, Missouri. As a young boy, John attended school at Hurricane Deck in Sun Rise Beach, Missouri, Camdenton Junior High School and High School in Versailles. For a short time, John served his country faithfully in the United States Army. John worked in the construction business as a carpenter. He worked for Wagoner's Roofing, also cut cedar and did some carnival work as well. In his spare time, John enjoyed being outdoors. You could find him either hunting, fishing, floating on the river, gardening or spending time with family and friends. John passed away Thursday, May 22, 2014, in his home in Richland, Missouri having attained the age of 53 years. He will be sadly missed, but fondly remembered by all those that knew and loved him. John leaves to cherish his memory two sisters, Frances "Louise" Hobbs of Richland, MO, and Paulette Lawson of Gravios Mills, MO; three brothers, Kenneth Calton, Earl Johnson, and Roy Johnson all of Versailles, MO; a nephew Cody Hobbs of St. Robert, MO as well as a host of other nieces, nephews, uncles, aunts, and cousins. In addition to his parents, John was preceded in death by one brother, Gene Calton. A graveside service was held at 11:00 a.m., Tuesday, May 27, 2014 in the Idumea Cemetery, near Laquey, Missouri with Bro. Merrell Jefferies officiating. Favorite music selections included, "Precious Memories," "Go Rest High on that Mountain" and "Amazing Grace." Serving as escorts were Cody Hobbs, Jim Schwartz, Shane Ware, John Bastean, Steve Douglas and Mike Vire. Serving as honorary escorts were Robbie Lynch, Leonard Johnson, Roy Johnson, Rick Lawson and Steve Dorothy. Military Honors were provided by the Missouri Honors Team. Services were under the direction of Memorial Chapels of Richland. In lieu of flowers the family has requested memorial contributions be made in memory of John William Johnson and can be left at the Memorial Chapel of Richland.

The family of John William Johnson created this Life Tributes page to make it easy to share your memories.