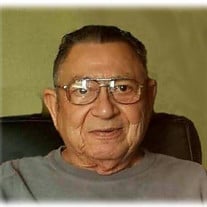 John D. Morten, Jr., son of the late John D. Morten and Lucille (Mosley) Morten, was born May 16, 1936 in Randolph, Virginia. He passed away Wednesday, November 25, 2020 in the Cedar Pointe Nursing Center of Rolla, Missouri having attained the age of 84 years. John grew up and attended school in Randolph, Virginia and shortly after graduation, he entered the United States Army. He served his country faithfully for 29 years until his retirement and had attained the rank of Command Sergeant Major. For his service, he earned several awards and commendations; some of which include: National defense Service Medal, Good Conduct Medal (9th Award), Army Commendation Medal w/3 Oak Leaf Clusters, Bronze Star Medal, Meritorious Service Medal, Armed Forces Expeditionary Medal, Non-Commissioned Officer Professional Development Ribbon (5), Armed Services Ribbon, Parachute Badge, Overseas Service Ribbon (4), Expert Qualification Badge M16, Republic of Vietnam Campaign Medal w/60 Device, Vietnam Service Medal w/2 Bronze Service Stars and the Legion of Merit. John served during the Vietnam War and with the Airborne Infantry division. John was blessed with three children: Thomas, Sandy, and Michelle from a previous marriage. While serving in the military, John was united in marriage to Uta Lucia Frank and their union was blessed with two children: Michelle and Jonathon. After his retirement from the military, John continued serving his country as a Department of the Army contractor on Fort Leonard Wood. John was a member of several different organizations and was very involved in each one. He was a member of the Lions Club (District Governor of Lions), American Legion (Executive Committee member), 40/8 (Sous Chef de Train for Missouri), Boys Scouts and Order of the Arrow with Jonathon. In his spare time, John enjoyed collecting coins, and playing the lottery. He also loved to work in his garden, and especially enjoyed having the kids take out all of the rocks. In 1988, he grew a 198lb pumpkin which was a news item in the newspaper. John will be sadly missed, but fondly remembered by all those that knew and loved him. He leaves to cherish his memory, his four children: Michelle Evans of St. Robert, MO, Jonathon Morten (Amanda) of Boonville, MO, Sandra Morton of Largo, FL, and Michelle Wilhite of Memphis, TN; eleven grandchildren; several great grandchildren; three sisters: Alma Garland, Joan Jackson and Marie Hancock, all of the state of Ohio; several nieces, nephews, other relatives, and friends. In addition to his parents, John was preceded in death by one brother: Tommy; one son: Thomas; and one grandson: Justus. Graveside services with military honors were held at 3:30 p.m. Tuesday, December 1, 2020 in the Deerlick Cemetery of Waynesville with Pastor Calvin Gladden officiating. Serving as escorts were family and friends. Military honors were provided by the Missouri Honors Team. Services were under the direction of Memorial Chapels and Crematory of Waynesville / St. Robert. Memorial contributions may be made in memory of CSM (Ret) John Morten and may be left at Memorial Chapels and Crematory of Waynesville / St. Robert.

The family of CSM (Ret) John D. Morton Jr. created this Life Tributes page to make it easy to share your memories.