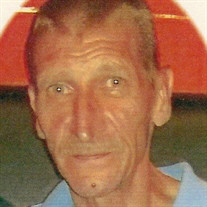 John David Paul, son of Hershel Oris and Emma Sue (Wilson) Paul, was born December 25, 1958, in Waynesville, Missouri. He departed this life Friday, September 29, 2017, in Lake Regional Hospital, in Osage Beach, Missouri, at the age of fifty-eight years, nine months and four days. He was preceded in death by his parents; two granddaughters, Dixie Brooke Paul and Chelsey Farge; two brothers, Barry Dwayne Paul and Roger Paul; sister, Janie Howell; and a nephew, Eric Williams. David is survived by three daughters, Rachel Paul (John) of Crocker, MO, Carrie Steward of Laquey, MO, and Heather Steward (Nathan) of Swedeborg, MO; six grandchildren, Kalvin Paul, Cheyenne Paul, Myia Lloyd, Eleashea Farge, Ethan Farge, and Matthew Jarrett; two brothers, Danny Paul (Donna) of Richland, MO and Oris Paul (June) of Lebanon, MO; four sisters, Patsy Elgin of Laquey, MO, Paula Wright of Richland, MO, Peggy Hall (James) of Richland, MO, and Darlene Finley of Lebanon, MO; several nieces, nephews, cousins and other relatives and friends. He was born in Waynesville and reared in the Richland Community where he attended school. He continued residing in the Richland area throughout his life except for a few years when he lived in Kansas City, Missouri. He worked as a welder during his life, working at Detroit Tool in Lebanon, and for a car body shop, as well as doing other welding jobs. He enjoyed being with family and friends, especially with his grandchildren. In his spare time he liked to work on cars, building model cars, or just sitting on the porch watching the world go by. David was a loving father, grandfather, brother and uncle, and was a caring neighbor and friend. He will be fondly remembered and greatly missed by all those that knew and loved him. We celebrate his life and well treasure the wonderful memories he created for his family and friends. He will live on in our hearts forever. Services were held at 2:00 p.m. Monday, October 2, 2017 in the Memorial Chapel of Richland with Pastor Chris Hendrix officiating. The songs “Tin Man”, “People Are Crazy” and “Daddy’s Hands” were played. Serving as escorts were John Lloyd, Donald Paul, Jonathan Wright, Shane Hall, Nathan Farge, and J.D. Hall. Serving as honorary escorts were Malcom Smith and Billy Elzey. Burial followed in the Oaklawn Cemetery of Richland, Missouri. Memorial contributions may be made in memory of David Paul and may be left at the funeral home.

The family of John "David" Paul created this Life Tributes page to make it easy to share your memories.