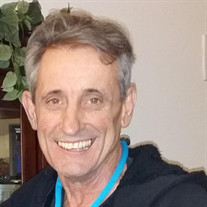 John Steven Perry, son of John Junior Perry and JoAnn (Avis) Hansen, was born August 27, 1961 in Baltimore, Maryland. As a young boy, John grew up in Waynesville, Missouri and graduated from Waynesville High School. John was united in marriage to Susan Kay Isner in Waynesville, Missouri. They lived all their married life in the Waynesville area and were blessed with three children: Mandy, John Jr., and Zachary. Susan preceded him in death on February 12, 2016. John began working as a teenager. He worked as a dishwasher, lifeguard, at Sonic Drive-in, and other odd jobs. He then began working in construction and worked for Bales Construction before opening and operating his own plumbing and construction business: Perry Construction and Plumbing. In his spare time, John enjoyed being outdoors. You could find him either hunting, fishing, just relaxing on the river or the lake, jogging, or taking a walk. He loved playing basketball and was a coach for Johnny and Zach’s basketball teams. He also coached Mandy’s softball team and he treasured all those extra times with his kids. John was a member of the Waynesville / Ft. Wood Masonic Lodge #375 AF & AM and the Abou Ben Adhem Shrine in Springfield, MO. John passed away Sunday, February 7, 2021 in his home having attained the age of 59 years, 5 months, and 11 days. He will be sadly missed, but fondly remembered by all those that knew and loved him. John leaves to cherish his memory, his mother: JoAnn Hansen of Waynesville, MO; three children: Mandy Bays of Waynesville, MO, John Perry, Jr. of Waynesville, MO, and Zach Perry (Marissa) of Waynesville, MO; three grandchildren: Malayah Perry, Jersey Middleton and Zachary Perry, Jr.; one brother: Dennis Perry (Leah) of Cincinnati, OH; one sister: Lana Zollman (John) of Waynesville, MO; companion: Pam Huey of Waynesville, MO; several nieces, nephews, other relatives, and friends. In addition to his wife Susan, John was preceded in death by his father, John Junior Perry. Services were held at 1:00 p.m. Thursday, February 11, 2021 in the Memorial Chapels and Crematory of Waynesville / St. Robert with Pastor Danny Graves officiating. Calvin Bowling sang “Go Rest High on that Mountain” and the songs “Drops of Jupiter” by Train and “Spirit in the Sky” by Norman Greenbaum were played. Serving as escorts were John Perry, JR., Zach Perry, Sr., John Zollman, Steven Zollman, Steve Gryener, and Ben Dumas. Serving as honorary escorts were John Philip Zollman and Zachary Perry, Jr. Burial followed in the Sunset Memorial Estates Cemetery of Waynesville. Memorial contributions may be made in memory of John Perry and may be left at Memorial Chapels and Crematory of Waynesville / St. Robert.

The family of John Steven Perry created this Life Tributes page to make it easy to share your memories.