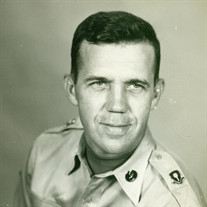 John Ernest Sheehan, son of the late Hillary and Viola Mae (Baynes) Sheehan, was born November 3, 1935 in Louisville, Kentucky where he grew up and attended school. In 1952, John enlisted in the United States Marines and served for seven years before joining the United States Army in 1959. He served his country faithfully until his retirement in 1979. For his faithful service, he earned several awards and commendations; some of which included: the National Defense Service Medal w/1 Oak Leaf Cluster, Vietnam Service Medal w/1 Silver Service Star and 3 Bronze Service Stars, Republic of Vietnam Campaign Medal, Vietnamese Cross of Gallantry w/Palm, and Good Conduct Medal. He had attained the rank of Staff Sergeant. On August 7, 1958, John was united in marriage to the love of his life, Mary Alma Duncan in Louisville, Kentucky. They shared over 55 years of marriage together and five children: Patricia, Donna, Charles, Jackie and Benny. In 1962, John and Mary moved to the Fort Leonard Wood area due to John being in the military. They lived in this area since then except for some time spent overseas for assignments. After retiring from the military, John worked for 24 years at EDP on Fort Leonard Wood. John bought a farm near Crocker and loved spending time outdoors on the property. You could find him either fishing or hunting. He enjoyed watching old westerns and wrestling, but most importantly, he loved spending time with his family, especially his grandchildren. John had a heart of gold and would do anything that he could for others. John passed away Sunday, January 10, 2016 in the Mercy Hospital of Springfield, Missouri having attained the age of 80 years. He will be sadly missed, but fondly remembered by all those that knew and loved him. John leaves to cherish his memory, his 3 children, Patricia Zanetti (Charles) of Ocean Springs, MS, Donna Sharpensteen of Waynesville, MO, and Charles Cline of Crocker, MO; 6 grandchildren, Caleb Sharpensteen, Josh Sharpensteen (Tori), Brandy Gregory (Travis), Christina Goodin, Dianna Hicks, and Jessica Cline; 9 great-grandchildren; 4 great-great-grandchildren; and a host of other relatives and friends. In addition to his parents, John was preceded in death by his loving wife, Mary Sheehan; one daughter: Jackie Lynn Sheehan; one son: Benny Lee Cline; one son-in-law: Ronald Sharpensteen; three brothers: Cecil, Delbert and Joe Sheehan and one sister: Mary Hatfield. Graveside services with military honors were held at 2:00 p.m. Friday, January 15, 2016 in the Eastlawn Cemetery of Springfield, Missouri. Military honors were provided by the United States Army of Fort Leonard Wood, Missouri. Serving as escorts were Caleb Sharpensteen, Joshua Sharpensteen, Travis Gregory, Aaron Wolfe, Billy Monell and James Tart. Services were under the direction of Memorial Chapels and Crematory of Waynesville / St. Robert.

John Ernest Sheehan, son of the late Hillary and Viola Mae (Baynes) Sheehan, was born November 3, 1935 in Louisville, Kentucky where he grew up and attended school. In 1952, John enlisted in the United States Marines and served for seven... View Obituary & Service Information

The family of John Ernest Sheehan created this Life Tributes page to make it easy to share your memories.