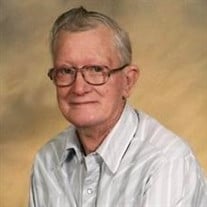 John Carter Spencer, son of the late Ernest Harrison and Edith Janette (Bryant) Spencer, was born February 10, 1932 in Couch, Missouri. John grew up and attended school in Maynard, Arkansas. On December 8, 1951, John was united in marriage to Dorothy Mae Moellencupp in Pocahontas, Arkansas. They were blessed with four children: Eugene, Judy, Ernie and Lora. In 1954, John was drafted into the United States Army and served his country during the Korean Conflict faithfully until his honorable discharge. On November 9, 1995, John was united in marriage to Carey Irene (Anderson) Blix in Waynesville, Missouri. They were blessed with 20 years of marriage together. John was a hardworking man and took great pride in helping provide for his family. He worked for Chevrolet Shell in St. Louis, Missouri and then moved back to Rolla Missouri where he worked for the Switzer Corporation. Later he moved to Texas where he worked for Dowell. He then worked for a few years for U-Haul in Tulsa, Oklahoma, before moving back to Missouri. He worked as a mechanic for many years and enjoyed working on different vehicles. In his spare time, John loved to be outdoors while fishing or working around the house on different projects. He loved tinkering with his vehicles. John had made a profession of faith and was a member of the Mt. Gibson Baptist Church in Waynesville. John went home to be with his Lord Monday, May 23, 2016 in the Life Care Center of Waynesville having attained the age of 84 years. He will be sadly missed, but fondly remembered by all those that knew and loved him. John leaves to cherish his memory, his wife: Irene Spencer of Waynesville, MO; three children: Eugene Spencer (Mary) of Jefferson City, MO, Judy Spencer Bogatzke (Todd) of Owensville, MO, and Ernest Spencer (Alberta) of Jefferson City, MO; seven grandchildren; eleven great grandchildren; three great-greatgrandchildren; two siblings: Dailey Spencer of Vichy, MO and Donnie Spencer of Pocahontas, AR; several nieces, nephews, other relatives and friends. In addition to his parents, John was preceded in death by his daughter: Lora Spencer Knoll; grandchildren: Katrisha & Matthew Moreland, four brothers: Ray Spencer, Ernest L. Spencer, Gerry Spencer and Lloyd Spencer; and sisters: Juneeler Achord, Louise Brewer and twin sisters: Pearl and Mearl Spencer. Funeral services were held at 1:00 p.m. Friday, May 27, 2016 in the Memorial Chapels and Crematory of Waynesville / St. Robert with Rev. Richard Breeden officiating. Pianist Lisa Schwandt accompanied Pam Seda as she sang “Just A Closer Walk With Thee” and led the congregation in “When We All Get To Heaven”. Serving as escorts were Mike Spencer, Chris Spencer, Nathan Cahill, Josh Cahill, John Downing and Matthew Spencer. Burial followed in the Waynesville Memorial Park Cemetery of Waynesville. Memorial contributions may be made in memory of John Spencer to the organization of the donor’s choice and may be left at the funeral home.

The family of John Carter Spencer created this Life Tributes page to make it easy to share your memories.