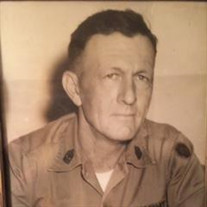 CSM (Ret) John Terrio, son of the late John and Arleen (Seibert) Terrio, was born October 19, 1928 in Newton, Massachusetts where he grew up and attended school. John entered the United States Army and served his country faithfully for 30 years. He served during World War II, Vietnam War and Korean Conflict. He had attained the rank of Command Sergeant Major and earned several awards and commendations; some of which include: Good Conduct Medal (7th Award), Vietnam Campaign Medal, Vietnam Service Medal, National Defense Service Medal w/Oak Leaf Cluster, WWII Victory Medal, Korean Service Medal, Army Commendation Medal, Bronze Star Medal, Republic of Vietnam National Campaign Medal, and Meritorious Unit Citation. John was united in marriage to Silvia Jean and they shared many wonderful years together before she preceded him in death on November 17, 1997. They were blessed with eight children: Shirley, Marilyn, James, William, Doris Schatke, Patricia, Robert and John Daniel. On June 19, 2001, John was united in marriage to Irmgard Fickinger in Minneapolis, Kansas and they had 15 wonderful years together. After retiring from the military, John worked as a handyman for 25 years. In his spare time, he enjoyed woodworking, hunting, gardening, traveling and most of all he loved being a grandpa. He treasured those times spent with his family, especially the grandkids. John passed away Monday, May 2, 2016 in the General Leonard Wood Army Community Hospital of Fort Leonard Wood, Missouri having attained the age of 87 years. He will be sadly missed, but fondly remembered by all those that knew and loved him. John leaves to cherish his memory, his wife: Irmgard Terrio of the home; eight children: Shirley Heaton of the state of Louisiana, Marilyn McDaniel of the state of Colorado, James Terrio (Loretta) of the state of Missouri, William Terrio (Charlene) of the state of Missouri, Doris Schatke (Werner) of the state of Texas, Patricia Black (Jeffery) of the state of Missouri, Robert Terrio (Kathleen) of the state of Missouri and John Daniel Terrio (Becky) of the state of Missouri; seven stepchildren: Mike Campbell (Diana) of the state of Washington, Mary Abildgaard of the state of Kansas, Katrina Pollet (Rex) of the state of Kansas, Diane Garber (Kevin) of the state of Virginia, Maria Latham (Gary) of the state of Michigan, Robert Campbell (Emma) of the state of Kansas and John Campbell (Danya) of the state of Kansas; numerous grandchildren, great grandchildren, great-great grandchildren; several nieces, nephews, other relatives and friends. Services were held at 10:00 a.m. Friday, May 6, 2016 in the St. Robert Bellarmine Catholic Church of St. Robert, Missouri with Father John Groner and Father Ken Bolin officiating. Serving as escorts were the United States Army. Burial with military honors followed in the Resurrection Cemetery of St. Robert, Missouri. Military honors were provided by the United States Army of Fort Leonard Wood, Missouri. Services were under the direction of Memorial Chapels and Crematory of Waynesville / St. Robert. In lieu of flowers, memorial contributions are suggested in memory of John Terrio to the Special Olympics or the St. Robert Bellarmine Catholic Church and may be left at the funeral home.

CSM (Ret) John Terrio, son of the late John and Arleen (Seibert) Terrio, was born October 19, 1928 in Newton, Massachusetts where he grew up and attended school. John entered the United States Army and served his country faithfully for... View Obituary & Service Information

The family of CSM (Ret) John Terrio created this Life Tributes page to make it easy to share your memories.