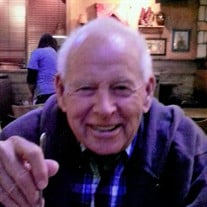 John Francis Tregaskis, son of the late Hubert and Helen (Taylor) Tregaskis, was born October 8, 1934 in Pawtucket, Rhode Island where he grew up and attended school. John entered the United States Navy in 1954 and served his country faithfully until his retirement in 1983. He had attained the rank of 1st Class Petty Officer and served as a Seabee in the Vietnam War. He earned several awards and commendations for his faithful service. John was united in marriage to Irene Nancy Tregaskis. She was born on January 30, 1933 and passed away August 8, 2008 at the age of 75. John and Irene shared many wonderful years of marriage together and were blessed with two daughters: Deborah and Kathy. After retiring from the Navy, John and Irene lived in California and he began working as a heavy equipment operator. He worked for the city of Thousand Oaks for 15 years as an equipment operator and utilities manager. Irene worked as a realtor in the Thousand Oaks area. In his spare time, John enjoyed deep sea fishing and he and Irene loved to work in their garden and do landscaping. John loved his dog Dee Dee, but most importantly, he and Irene loved spending time with their family and friends. John was a member of the Veterans of Foreign Wars, American Legion and the Fleet Reserve. John passed away Wednesday, November 19, 2014 in the Mercy Hospital of Springfield, Missouri having attained the age of 80 years, 1 month and 11 days. He will be sadly missed but fondly remembered by all those that knew and loved him. John and Irene leave to cherish their memory, two daughters: Deborah Tregaskis of St. Robert, MO and Kathy Lentz and husband Richard of Dixon, MO; one brother: William Tregaskis of Pawtucket, RI; one sister: Kathryn Robinson of Pawtucket, RI; four grandchildren: Daniel Simpson and wife Kristine of Seattle, WA, Jonathan Simpson of St. Robert, MO, Jennifer Lentz of Dixon, MO and Justin Lentz of Dixon, MO; two great granddaughters: Faith and Ali Simpson, both of Seattle, WA; nieces, nephews, other relatives and friends. In addition to his parents and wife, John was preceded in death by one brother, James Tregaskis. Graveside services with military honors were held at 2:00 p.m. Monday, December 15, 2014 in the Missouri Veterans Cemetery of Waynesville, Missouri with Chaplain (LT) Jin Choi officiating. Military honors were provided by the United States Navy. Services were under the direction of Memorial Chapels and Crematory of Waynesville / St. Robert.

John Francis Tregaskis, son of the late Hubert and Helen (Taylor) Tregaskis, was born October 8, 1934 in Pawtucket, Rhode Island where he grew up and attended school. John entered the United States Navy in 1954 and served his country faithfully... View Obituary & Service Information

The family of John Francis Tregaskis created this Life Tributes page to make it easy to share your memories.