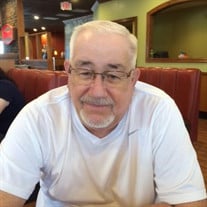 Johnny Lee Clapp was born to the union of the late Porter Lee and Nellie Mae (House) Clapp in Paducah, Kentucky. In 1960, Johnny entered the United States Army and served his country faithfully for 22 ½ years. He had attached the rank of Sergeant First Class and earned several awards and commendations; some of which include: National Defense Service Medal, Army Commendation Medal w/2 Oak Leaf Clusters, Good Conduct Medal (6th Award), Expert Infantry Badge, Overseas Service Ribbon (4), Army Achievement Medal, Expert Qualification Badge M-16, NCO Professional Development Ribbon (3), Army Service Ribbon, German Shooter Cardin in Bronze, German MKM in Silver and Meritorious Service Medal. Johnny met a girl by the name of Brenda Lou Cate in Paducah and they were united in marriage on October 22, 1966 in Metropolis, Illinois. They shared over 50 years of marriage together and were blessed with one daughter, Kimberly, and shared two children, Johnny and Jeannie. In 1978, towards the end of his military career, Johnny was transferred to Fort Leonard Wood, Missouri where he remained after his retirement. He began working as the Intermural Sports Director for Fort Leonard Wood and retired from that position in 2005 after serving for a total of 45 years as a federal servant. In his spare time, Johnny loved to be outdoors while hunting and fishing. He also was very talented when it came to woodworking. He built 19 different toy trucks, 18 wheelers, oil tanks, and road graders. He also made tables and anything else he could imagine. Johnny made a very important decision in his life and accepted Jesus Christ as his Savior. He was a member of the Berean Baptist Church and loved coming to church and fellowshipping with fellow believers. He attended every time he could until his health began to decline. Johnny went home to be with his Lord Saturday, March 4, 2017, in the General Leonard Wood Army Community Hospital of Ft. Leonard Wood, Missouri having attained the age of 74 years. He will be sadly missed, but fondly remembered by all those that knew and loved him. He leaves to cherish his memory, his wife: Brenda of the home; his daughter: Kimberly Ramirez and husband Donald of St. Robert, MO, grandson Mathew and fiancé Shea of Virginia, grandson Dustin and his girlfriend Christin, one great granddaughter Adilyn and one great grandson Alex of St. Robert, MO; his son: Johnny Clapp Jr. and his wife Erin and their two daughters Sophie and Abby of the state of South Carolina; his daughter: Jeannie Hamilton and husband Jim and her two sons Timothy and Conneur, of the state of Michigan; one sister: Edith Mae of Paducah, KY; two other grandchildren and two other great grandchildren; other relatives and friends. In addition to his parents, Johnny was preceded in death by one sister: Betty Greif; and two brothers: Robert House Clapp and Wilferd Ladd Clapp. Services were held at 11:00 a.m. Saturday, March 11, 2017 in the Berean Baptist Church of Laquey with Pastor Chris Hendrix and Pastor Mike Hawkins officiating. The Berean Baptist Church choir sang “Amazing Grace” and “How Great Thou Art”. Serving as escorts were the United States Army. Burial with military honors followed in the Sunset Memorial Estates Cemetery of Waynesville. Military honors were provided by the United States Army of Fort Leonard Wood, Missouri. Services were under the direction of Memorial Chapels and Crematory of Waynesville / St. Robert. Memorial contributions may be made in memory of Johnny Clapp to the Special Olympics and may be left at the funeral home.

Johnny Lee Clapp was born to the union of the late Porter Lee and Nellie Mae (House) Clapp in Paducah, Kentucky. In 1960, Johnny entered the United States Army and served his country faithfully for 22 ½ years. He had attached the rank... View Obituary & Service Information

The family of Johnny Lee Clapp created this Life Tributes page to make it easy to share your memories.

Johnny Lee Clapp was born to the union of the late Porter Lee...