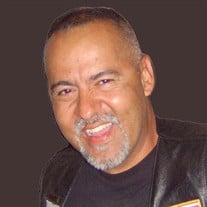 SFC (Ret) Johnny Lozano, son of Juan and Elva (Morales) Lozano, was born October 25, 1964 in Corpus Christi, Texas. He passed away Tuesday, February 4, 2020 in the Cox Hospital South of Springfield, Missouri having attained the age of 55 years. Johnny grew up in Corpus Christi and graduated from Roy Miller High School. During his high school years, he met a young girl by the name of Ana Victoria Tamayo. They became high school sweethearts and were united in marriage on December 21, 1985. Johnny and Ana were blessed with two children: Victoria and Andrea. Johnny entered the United States Army and served his country faithfully until his retirement on August 31, 2004. He had attained the rank of Sergeant First Class and earned several awards and commendations; some of which include: Meritorious Service Medal, Army Commendation Medal (5th Award), Army Achievement Medal (3rd Award), Army Superior Unit Award (2nd Award), Army Good Conduct Medal (6th Award), National Defense Service Medal (2nd Award), Global War on Terrorism Service Medal, Noncommissioned Officer’s Professional Development Ribbon with Numeral 3, Army Service Ribbon, Overseas Service Ribbon, Driver and Mechanic Badge, and the US Army Gold Recruiter Badge with 3 Sapphire Achievement Stars. After his retirement from the military, Johnny continued serving his country as a civil service employee. He worked as a Training Specialist in the training development area of Fort Leonard Wood for many years. In his spare time, Johnny enjoyed being outdoors and working with his hands. He loved working with his bees, collecting the honey and sharing it with his friends and family. He also enjoyed riding his motorcycle with his wife and friends, woodworking, perfecting his leather craft, and restoring classic vehicles. Johnny was a member of the Freedom of the Road Riders motorcycle organization, Richland Masonic Lodge #385 AF & AM, the Waynesville/Ft. Wood Shrine Club and the Ft. Wood Area Beeks. Johnny was a true family man. He loved his family very much and was always looking for ways to make their lives better. He always had their best interest in mind and put them first. That attitude was not just for his immediate family, but for his extended family as well. He always looked forward to spending time with them as much as possible, and especially spending time with his grandchildren. Johnny will be sadly missed, but fondly remembered by all those who knew and loved him. He leaves to cherish his memory, his wife: Ana Lozano of the home; parents: Juan and Elva Lozano of Corpus Christi, TX; two children: Victoria Cruz (Anthony) of Lake Elsinore, CA and Andrea Lozano (Kaley) of St. Louis, MO; two grandchildren: Analeah and Roman Cruz; one sister: Anna Truan of Corpus Christi, TX; one brother: Joey Lozano (Veronica) of San Antonio, TX; four nephews; two nieces; mother-in-law: Aracelis Tamayo of Corpus Christi, TX; two brothers-in-law: Carlos Tamayo of New Brunswick, NJ and Jose Tamayo (Lorena) of Corpus Christi, TX; other relatives, friemily and friends. Johnny was preceded in death by his father-in-law: Carlos Tamayo. Even though he is gone from our sight, Johnny’s memory will live on in our hearts forever. Service with military honors was held at 2:00 p.m. Saturday, February 8, 2020 in the Main Post Chapel of Fort Leonard Wood, Missouri with Chaplain Robert B. Hensley of the 14th Military Police Brigade officiating. Military honors were provided by the United States Army of Fort Leonard Wood, Missouri. Services were under the direction of Memorial Chapels and Crematory of Waynesville / St. Robert. Memorial contributions may be made in memory of SFC (Ret) Johnny Lozano and may be left at Memorial Chapels and Crematory of Waynesville / St. Robert.

The family of SFC (Ret) Johnny Lozano created this Life Tributes page to make it easy to share your memories.