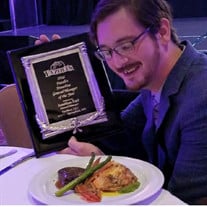 Jonathan David Earl, son of Jackie Earl and Ethel Mary (Toth) Earl, was born December 1, 1989 in Germany. Due to his father being in the military, Jonathan and the family were transferred to Fort Leonard Wood, Missouri where Jonathan graduated from Waynesville High School. Jonathan began working in the restaurant industry and was a chef / supervisor for Fazoli’s for a time where he was named Manager of the Year. He was recently a chef for Big Whiskey’s in Springfield and loved his job. In his spare time, Jonathan enjoyed taking photos. He never went anywhere without his camera and was always looking for a photo op. He also liked to play Dungeons and Dragons with his friends. Jonathan was a very friendly person and everyone that knew him enjoyed being around him. He was fun loving, but also a caring person and would do anything for his friends and family. Jonathan passed away Monday, November 23, 2020 having attained the age of 30 years. He will be sadly missed, but fondly remembered by all those that knew and loved him. Jonathan leaves to cherish his memory, his mother: Ethel Earl of Laquey, MO; four siblings: Jackie Earl and Christopher Earl, both of the state of Ohio, Robert Earl of Rolla, MO and Kat Robert of Laquey, MO; several nieces, nephews, other relatives, and friends. Jonathan was preceded in death by his father: Jackie Earl; paternal grandparents: Mary and James Earl; maternal grandparents: Barbara and Paul Toth; and paternal great grandmother: Tootsie Sailor. Services were held at 2:00 p.m. Tuesday, December 1, 2020 in the Memorial Chapels and Crematory of Waynesville / St. Robert with Pastor Richard Breeden officiating. The songs “Carry on Wayward Son” by Kansas, “Dreamer” by Ozzy Osbourne, “Nothing Else Matters” by Metallica, “Smiley Face” by Gnarls Barkley, and “Shine” by Collective Soul were played. Several friends and family members shared their wonderful memories of Jonathan. Memorial contributions may be made in memory of Jonathan David Earl and may be left at Memorial Chapels and Crematory of Waynesville / St. Robert.

Jonathan David Earl, son of Jackie Earl and Ethel Mary (Toth) Earl, was born December 1, 1989 in Germany. Due to his father being in the military, Jonathan and the family were transferred to Fort Leonard Wood, Missouri where Jonathan... View Obituary & Service Information

The family of Jonathan David Earl created this Life Tributes page to make it easy to share your memories.