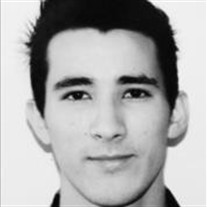 Jonathan Moore, son of John Charles and Chong Suk (Yang) Moore, was born October 9, 1994 in Seoul, Korea. He passed away Sunday, July 10, 2016 in Iberia, Missouri due to injuries sustained in a car accident. He had attained the age of 21 years, 9 months and 3 days. Due to his father being in the military, Jonathan and the family were transferred back to the United States and Jonathan spent most of his childhood in the Fort Leonard Wood area. He graduated from Waynesville High School with the Class of 2013. He was very involved in sports and played with the high school soccer team. Jonathan attended First Baptist Church of Waynesville. He was a hard worker and did his best at everything he did. He worked as a bagger at the Fort Leonard Wood Commissary, as a telemarket researcher, as a busser at Colton’s Steakhouse and at Café Korea as a server. In his spare time, Jonathan loved to be outdoors while fishing, which he was very good at. He was an animal lover and doted on cats and his two pups, Sally and Snowball. He enjoyed playing video games, especially Call of Duty and Fifa. He and his friends enjoyed taking long drives around town, listening to music and just visiting. Jonathan loved to eat, especially his favorite food, pizza. He could also eat ice cream for days and was always finding an excuse to have some of his favorite foods. Jonathan loved his family and friends tremendously and cared for them deeply. He will be sadly missed by all those that knew and loved him. He leaves to cherish his memory his father and mother John and Chong Moore of St. Robert, MO; one sister: Jin Moore of Colorado Springs, CO; one brother: Benjamin Moore of Norman, OK; one nephew: Jashon Hamilton of Colorado Springs, CO; other relatives and friends. Services were held at 7:00 p.m. Wednesday, July 13, 2016 in the First Baptist Church of Waynesville with Dr. Dennis Crowder officiating. The congregation sang “Lily of the Valley”, “How Firm a Foundation” and “Amazing Grace”. Soloist Doreen Horn sang “After”. Services were under the direction of Memorial Chapels and Crematory of Waynesville / St. Robert.

Jonathan Moore, son of John Charles and Chong Suk (Yang) Moore, was born October 9, 1994 in Seoul, Korea. He passed away Sunday, July 10, 2016 in Iberia, Missouri due to injuries sustained in a car accident. He had attained the age of 21 years,... View Obituary & Service Information

The family of Jonathan Moore created this Life Tributes page to make it easy to share your memories.