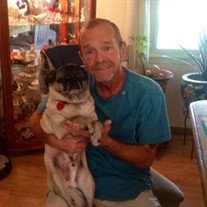 Joseph ‘Joe’ Marston Dailey, son of the late Darkis Ford Powers (Mother) and Walter Edward Dailey, Sr (Father), was born September 20, 1952 in Bennettsville, SC. Joe grew up in Bennettsville the youngest of four siblings, where he graduated from Mayo High School, a celebrated football athlete. He went on to attend community college, before making the commitment to serve our country. Joe enlisted in the United States Army in 1974, where he proudly served 20 years in the U.S. Army, and achieved the rank of E-7, Sergeant First Class (SFC). His service took him all over the world, including deployments in Italy and Korea. He was discharged with full honors in 1994, retiring in Waynesville, Missouri. While in Missouri, Joe met his other half, Maria ‘Teresa’ Wiggins. They became united in marriage on July 3, 1995. Their blended family was a great source of happiness and fueled their love of travel and road trips. Later, Joe found his professional calling, working as a Missouri Veterans Service Officer, soon being promoted to a Veterans Benefits Officer. Joe diligently helped countless men, women, and dependents, obtain their veteran benefits and privileges. Joe was a tireless advocate for veterans and their families. He took great pride in helping all those who needed it. His hard work and dedication did not go unnoticed, even earning him the Missouri State Employee of the Year honor, awarded by the Missouri Governor. After his retirement from the State, he continued to help by delivering meals and giving rides to veterans. In his spare time, Joe enjoyed spending time with friends and family. His favorite pastimes included fishing, and being outdoors (including keeping an immaculate, well-manicured lawn). Whether playing basketball, tossing around the football, jumping in the pool, or sharing his love of fishing, Joe was smiling and always ready to go. In addition to his love of the outdoors, he liked trying his luck at games of chance. Joe could run a pool table on you, bluff you out at a poker table, or turn a dollar lottery ticket into twenty. Joe was a beloved husband, dedicated father and proud grandfather who lit up the room. Spoiling grandchildren and his dogs were top priorities, and something he did often, included his cherished one-eyed Pug, Webster. Joe passed away peacefully surrounded by family and friends on January 26, 2021 in his home. He will be sadly missed but fondly remembered by those that knew and loved him. A man who never wanted to overstay his welcome, left us far too soon. He leaves behind his wife, Teresa Dailey; four children: Tracy Tritten (Jason) of Las Vegas, NV; Brian Dailey (Anji) of Plano, TX; Theodore ‘Ted’ Wiggins (Amily) of Washington DC; and Tomas Wiggins (Brandi) of Jefferson City, MO; ten grandchildren: Mabelle, Cash, Millie, Alayla, Jaxon, Taiese and wife Crystal, Antoinette and husband Derrick, Emma, Shannel, and Isabella; three great grandchildren; Samaria, Taiese, and Zenaida; several nieces, nephews, other relatives, and friends. In addition to his parents, Joe was preceded in death by his stepfather, Nathaniel Powers; his sister, Cassandra Diane Dailey Lundy; his brother, Walter ‘Bogie’ Edward Dailey, Jr; and brother, Steve Randall Dailey. Services were held at 11:00 a.m. Tuesday, February 2, 2021 in the Memorial Chapels and Crematory of Waynesville / St. Robert with Chaplain (MAJ) Phillip D. Redden officiating. The songs “Desperado” by the Eagles, “Life Without You” by Stevie Ray Vaughn, and “Our House” by Crosby, Stills, Nash & Young were played. Serving as escorts were family and friends. Burial with military honors followed in the Missouri Veterans Cemetery of Waynesville with military honors being provided by the Missouri Honors Team. Memorial contributions may be made in memory of SFC (Ret) Joe Dailey and may be left at Memorial Chapels and Crematory of Waynesville / St. Robert.

The family of SFC (Ret) Joseph Marston "Joe" Dailey created this Life Tributes page to make it easy to share your memories.