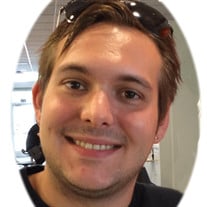 Joseph Nathaniel Howlett, son of Claude Russell and Tamera Marlene (Melton) Howlett, was born October 16, 1987 in Rolla, Missouri. He passed away Wednesday, December 30, 2015 in his home in Waynesville, Missouri having attained the age of 28 years, 2 months and 14 days. Joe, as he was known by his family and friends, grew up in the Waynesville area and graduated from Waynesville High School. After graduation, he attended college and graduated in 2009. Joe continued his education by attending Aviation School in Oklahoma and began working as an aviation specialist in Texas, specializing in GPS systems. Joe was united in marriage to Tracy Ericca Carey and they shared many wonderful memories. In his spare time, Joe enjoyed listening to and playing music, especially playing the drums. He was a fun loving person and loved spending time with his family. He was a wonderful uncle to his seven nieces and nephews. He was currently working in the family business. On March 10, 1996, Joe was baptized by his pastor, Lee Schaefer. Some of the best years in his life were when he was able to play the drums with the praise team at Westside Baptist Church in Waynesville. Joe will be sadly missed, but fondly remembered by all those that knew and loved him. He leaves to cherish his memory his parents: Russ and Tammy Howlett of Waynesville, MO; one sister: Jessica Shempert and husband Mike of Waynesville, MO; one brother: Jarod Howlett and wife Melissa of Jacksonville, FL; seven nieces and nephews: Isabel, Jacob and Emily Shempert and McKenna, Connor, Colin and Clayton Howlett; wife: Tracy Howlett of Springfield, MO; grandmother: Claudette Zeigenbein and husband Charlie of Brumley, MO; best friend: Robert Brunk; four uncles, other relatives and friends. Funeral services were held at 2:00 p.m. Sunday, January 3, 2016 in the Memorial Chapels and Crematory with Pastor Lindell Shelden officiating. The songs “God of Wonders”, “Take My Hand Precious Lord” and “Go Rest High on that Mountain” were played. Joe’s best friend Robert Brunk played Joe’s guitar and Robert’s sister Mary Brunk sang “Through It All” in honor of Joe. Former Westside Baptist Church praise team leader and family friend, Rich Lee, recalled his wonderful memories of serving with Joe. Serving as escorts were Michael J. Melton, Jarod, Adam and Scott Howlett, Mike and Jacob Shempert, Robert Brunk and Kyle Anderson. Burial followed in the Sunset Memorial Estates Cemetery of Waynesville. Services were under the direction of Memorial Chapels and Crematory of Waynesville / St. Robert. Memorial contributions may be made in memory of Joe Howlett and may be left at the funeral home. Online condolences can be sent at www.memorialchapelsandcrematory.com.

Joseph Nathaniel Howlett, son of Claude Russell and Tamera Marlene (Melton) Howlett, was born October 16, 1987 in Rolla, Missouri. He passed away Wednesday, December 30, 2015 in his home in Waynesville, Missouri having attained the age of 28... View Obituary & Service Information

The family of Joseph Nathaniel Howlett created this Life Tributes page to make it easy to share your memories.