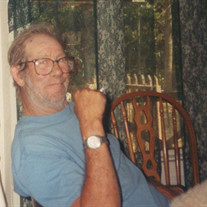 Joseph Henry Skidmore, Sr., “Joe” as he was known by, was one of six children born to Lacy George and Mary Francis (Ashworth) Skidmore on March 3, 1938 in Evening Shade, Missouri, where his family lived until age five, before moving to the Pulaski County area. Joe attended school in Laquey, Missouri until the eighth grade. Joe fell in love with Linda Fern (Peterson), and the two were married on August 7, 1964 in Richland, Missouri and they were soon blessed with the birth of their precious son, Joe Jr. Joe began driving a truck hauling cars and other items most of his life. He always enjoyed the view of the countryside as he drove. He also logged. In his spare time he enjoyed going to auctions, not just to find a bargain, but to visit with his friends and neighbors, as Joe knew no stranger. Joe’s treasures in this life were his family, especially his grandchildren; they were the apple of his eye. Joe passed away Thursday afternoon, January 7, 2016, in the Richland Care Center, Richland, Missouri, having attained the age of 77 years surrounded by his loving family. He leaves to cherish his son, Joe Skidmore, Jr. of Richland, MO; his mother: Mary Skidmore of Laquey, MO; 2 grandchildren: Akyis Skidmore and Logan Skidmore both of Richland, MO; two sisters: Helena Miller of Richland, MO and Agnes Martz (Thomas) of Talbotton, GA; three brothers: Lory Skidmore (Anna) of Laquey, MO, William Skidmore of Laquey, MO and Daniel Skidmore of Cataula, GA; several nieces, nephews, other relatives and friends. In addition to his beloved wife Linda (April 4, 2006), Joe was preceded in death by his father Lacy Skidmore. Services were held at 2:00 p.m., Monday, January 11, 2016, in the Memorial Chapel of Richland with Pastor Danny Graves officiating. Pianist-Soloist, Dana Wood sang “The Old Rugged Cross,” “A Heart That Will Never Break Again,” and “I Sure Miss You.” Johnny Cash’s recording of “Ain’t No Grave Gonna Hold Me Down” was also played. Serving as escorts were James Skidmore, Mauro Skidmore, Jim Miller, Clint Peterson, Gerald Peterson and Bobby Peterson. Honorary escort was Mike Peterson. Burial followed in the Bethlehem Cemetery near Richland, Missouri. Services were under the direction of Memorial Chapel of Richland. In lieu of flowers, the family has requested Memorial Contributions be made in memory of Joe Skidmore, Sr., and may be left at the Memorial Chapel of Richland. Online condolences may be sent to www.memorialchapelsandcrematory.com

Joseph Henry Skidmore, Sr., &#8220;Joe&#8221; as he was known by, was one of six children born to Lacy George and Mary Francis (Ashworth) Skidmore on March 3, 1938 in Evening Shade, Missouri, where his family lived until age five, before moving... View Obituary & Service Information

The family of Joseph "Joe" Henry Skidmore Sr. created this Life Tributes page to make it easy to share your memories.