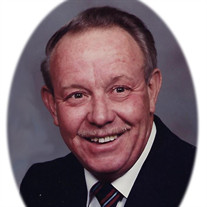 Joseph Richard Moore, son of the late Joseph Herschel and Floy Mae (Gregory) Moore, was born May 25, 1932 in Stoutland, Missouri. He went home to be with his Lord on Friday, June 12, 2020 in the Life Care Center of Waynesville having attained the age of 88 years. Joe grew up in the Stoutland area and graduated from Stoutland High School with the Class of 1951. Shortly after graduation, Joe worked as a truck driver for L.G. Brown in Kansas City, Missouri before entering the United States Army in 1952. He served his country faithfully until his honorable discharge in 1955 and attained the rank of Corporal. He earned the National Defense Service Medal and the Good Conduct Medal. Joe served in the Korean War and was stationed in Alaska where he was in charge of building a ballfield, all the furniture for the barracks and the offices. He also flew on missions of rescue while there. On July 12, 1952, Joe was united in marriage to Marie Bookhout in Kansas City, Missouri. They shared over 59 years of marriage together before she preceded him in death on November 28, 2011. Joe and Marie were blessed with three children: Kathy, Cindy and Larry. After Joe’s honorable discharge from the military, he worked as a service repairman for Richland Hardware for 7 years before beginning employment with the Lee Co. as a sewing mechanic. He retired after 24 years. Joe enjoyed working and even while working full time, he had a sheet metal and electrical business on the side and also served as a volunteer fireman for about 12 years. When Joe was not working, he was usually doing volunteer work in his community. He was a member of the Lions Club, served as PTO President at the Richland Schools, Cub Scout leader, baseball manager and umpire for several years. At an early age, Joe had made a profession of faith. His faith was very important to him and he believed in helping his church as best he could. He served as Chairman of the Trustees at Richland United Methodist Church several time, Chairman of Administration at least 12 years and youth leader. In his spare time, Joe enjoyed working with animals on his farm and he was known as someone who could tame the wildest of animals. He also loved spending time with his family and friends, especially when they could go to Lake of the Ozarks and spend time on the boat. Joe loved his family dearly and treasured the times that they could spend together. He will be sadly missed, but fondly remembered by all those that knew and loved him. He leaves to cherish his memory, his two daughters: Kathy Parrish (John) of Lebanon, MO, and Cindy Frank (Gerry) of Richland, MO; seven grandchildren: Dustin Crayton (Amanda), Jamie York (Ted), Eric Crayton (Jamie), Kelli Henson (Matt), Darin Frank (Noelle), Geremy Frank (Lindsey), and Brandon Moore (Shea); sixteen great-grandchildren; his brother: Charles Moore (Joyce) of Lebanon, MO; a number of nieces and nephews; as well as a host of other relatives and friends. In addition to his parents and his wife, Joe was preceded in death by one son, Larry. Even though he is gone from our sight, Joe’s big smile and joyful spirit will live on in our hearts forever. We know that he is finally home with his Lord and Savior and reunited with Marie. We can celebrate his life because we will see him again. Services were held at 12:00 p.m. Tuesday, June 16, 2020 in the Memorial Chapel of Richland with Pastor Chuck Baker officiating. Becky Lercher sang "Thinkin' About Home" and "Celebrate Me Home". Serving as escorts were Dustin Crayton, Eric Crayton, Darin Frank, Geremy Frank, Brandon Moore, Matt Henson and Ted York. Burial with military honors followed in the Oaklawn Cemetery of Richland, Missouri. Military honors were provided by the Missouri Honors Team. Memorial contributions may be made in memory of Joe Moore to the St. Jude's Children's Hospital and may be left at Memorial Chapel of Richland.

Joseph Richard Moore, son of the late Joseph Herschel and Floy Mae (Gregory) Moore, was born May 25, 1932 in Stoutland, Missouri. He went home to be with his Lord on Friday, June 12, 2020 in the Life Care Center of Waynesville having attained... View Obituary & Service Information

The family of Joseph Richard Moore created this Life Tributes page to make it easy to share your memories.