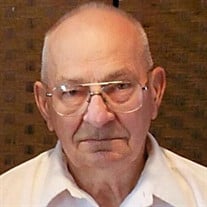 Joseph F. Novak III was born December 12, 1935 to Joseph F. and Elizabeth Mary (Thornton) Novak, in Chicago, Illinois, where he grew up and attended school. On January 6, 1954, Joe entered the United States Air Force proudly serving his country receiving the National Defense Service Medal and Good Conduct Medal before his honorable discharge on February 13, 1958. Joe had a strong work ethic and for most of his working years drove a truck. He always enjoyed seeing various places during his trucking career. On March 24, 1956 in Memphis, Tennessee, Joe married the love of his life, Carol Jeanne Swanson and to their union three children were born Michael, Katharine and Daniel. They made their homes in Chicago, Illinois and Lincoln, Nebraska until 2005. Together they shared nearly sixty years together before Carol’s passing on March 16, 2016. When Joe was a young man, he made a profession in faith. He and Carol loved listening to and watching various gospel quartets. Back in the day Joe occasionally led music at his former churches, one being in Romeoville, Illinois. He and Carol also welcomed the college and career group from FBC in Bellevue, Nebraska into their home for studies in the word, fun and fellowship. After moving to Richland in 2005, Joe and Carol became beloved members of Grace Baptist Church where he was affectionately called “Papa Joe” and was known to give out warm hugs each Sunday to those he loved. Papa also had a humorous side and would jokingly let the pastor know that he’d just received the best sleep he’d had since last Sunday’s sermon which made everyone chuckle. Joe’s morning and nightly routine was Facebooking with friends and family. His other hobbies included embroidering blocks of fabric for the beautiful quilts he made and crafting things from wood; this came in handy while making various things for his train station and village which he proudly displayed and showed to anyone interested. Papa was a lover of Golden Retrievers and had several special four legged friends down through the years. However times spent with his friends and family were most important to Papa. He was especially proud of all his grandchildren and their achievements. Papa Joe was a simple man. He may have seemed a little rough and tough around the edges to some; but once you got to know him you’d soon realize he was just an old softie with a tender heart and was fiercely loyal to those he loved. In the early morning hours of Saturday, December 23, 2017, lovingly surrounded by his family, Papa went home to be with his Lord and Savior having attained the age of 82 years and 11 days. In addition to his parents, Joe was preceded in death by his loving, wife, Carol, beloved son, Michael Edward Novak, and two grandchildren, Rebecca and Bradley and one sister, Joann Sieger. Joe’s memory will always be treasured by his two children: Katharine Cofer (Howard) of Nolensville, TN, Daniel Novak (Debra) of Richland, MO, 10 grandchildren: Kyla Nichols (Chas), Brian Cofer (Kate), Leah Morgan (Christopher), Melanie Vignal (Matt), Merikate Novak, Alicia Novak, Amy Cofer, Ashley Novak, Matthew Novak and Lydia Novak; 6 great-grandchildren: Coleman, Caeden and Loralynn Morgan, Logan Nichols, Harrison Cofer and Edith Vignal; brother: Arnold Novak and sister: Margaret Blameuser both of Chicago, IL; his beloved dog, Ellie Mae; several nieces, nephews, other relatives and friends. Services were held at 10:10 A.M., Saturday, January 6, 2018 in the Grace Baptist Church of Richland, Missouri with Pastor Fred Bobe officiating. Eulogy was given by Robert Sieger. Daniel Novak and Howard Cofer shared their fond memories of “Papa” as did several other beloved family members and friends. Song leader and pianist, Mary Ann Tate led the congregation in singing “Near the Cross and “Victory in Jesus.” Mary Ann then sang her “In the Garden Medley.” Soloist, Becky Lercher followed with “I’ll Fly Away.” Serving as pallbearers were Howard Cofer, Brian Cofer, Matt Vignal, Daniel Novak, Matt Novak, Chas Novak, and Christopher Morgan. Burial with Military Honors followed and were provided by the United States Air Force and the American Legion Post 240 of Richland. Services were under the care of Memorial Chapel of Richland. Memorial contributions may be made in memory of Joe Novak to either Grace Baptist Church of Richland or to the St. Jude’s Children’s Hospital and may be left at the Memorial Chapel of Richland. Online condolences may be sent to www.memorialchapelsandcrematory.com

The family of Joseph F. Novak III created this Life Tributes page to make it easy to share your memories.