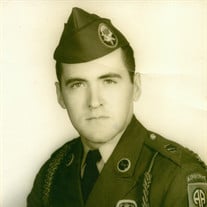 Joseph St. George, son of Joseph St. George and Helen nee Sari, was born May 15, 1940 in Tököl, Hungary. He passed away Thursday, January 18, 2018 in the Phelps County Regional Medical Center of Rolla having attained the age of 77 years. At the age of 16, Joseph and his family came to the United States and made their home in Illinois. In 1959, he entered the United States Army and served his country faithfully for 20 years having attained the rank of Staff Sergeant. He served in Vietnam, Cuba, Panama, and the Philippines. For his faithful service, Joseph earned several awards and commendations; some of which include: National Defense Service Medal, Armed Forces Expeditionary Medal (Dom Rep), Combat Infantry Badge, Armed Forces Expeditionary Medal (Korea), Good Conduct Medal (4th Award), Parachute Badge and Expert Qualification Badge M16. While in Panama, Joseph met Delmira A. Castillo and they were united in marriage on January 2, 1974 in Panama City, Panama. They shared over 44 years of marriage together and were blessed with two sons: Joseph Jr. and John. After retiring from the military, Joseph continued serving his country as a civil service employee. He worked with EDP Enterprises and DOL and retired after 20 years of service with DOL. In his spare time, Joseph enjoyed being outdoors fishing and hunting and relaxing at home watching his favorite TV game shows; The Price is Right, Wheel of Fortune and Family Feud. He loved to work with his hands, doing everything from tending to his vegetable garden to tinkering in mechanics and woodworking. He proudly built his home for his family. He was a member of the Knights of Columbus. Joseph will be sadly missed, but fondly remembered by all those that knew and loved him. He leaves to cherish his memory, his wife, Delmira of the home; two sons, Joseph St. George, Jr. of Waynesville, MO and John St. George (Sara) of Miami, FL; a granddaughter, Lucia St. George of Miami, FL; his mother, Helen (nee Sari) Berki of Stongsville, OH; two sisters, Helen Gangel (Joe) of Strongsville, OH and Pindi (Randy) Christopher of Lake Mary, FL; a brother Julius (Jackie) St. George of Middleton, OH; a number of nieces and nephews; as well as a host of other relatives and friends. Joseph was preceded in death by his father, Joseph St. George; three brothers: Sonny, John and Leslie St. George; and two sisters: Eva Ohla and Irene Stiller. Services were held at 10:00 a.m. Tuesday, January 23, 2018 in the St. Robert Bellarmine Catholic Church of St. Robert, Missouri with Father John Groner officiating. Dr. Sara St. George, Joe’s favorite daughter-in-law, did the reading and music was provided by Soloist Mike Beatty and Organist Evelyn Horine. Burial with military honors followed in the Resurrection Cemetery of St. Robert, Missouri. Military honors were provided by the United States Army of Fort Leonard Wood, Missouri. Services were under the direction of Memorial Chapels and Crematory of Waynesville / St. Robert. Memorial contributions may be made in memory of Joseph St. George and may be left at the funeral home.

Joseph St. George, son of Joseph St. George and Helen nee Sari, was born May 15, 1940 in Tököl, Hungary. He passed away Thursday, January 18, 2018 in the Phelps County Regional Medical Center of Rolla having attained the age of 77 years.... View Obituary & Service Information

The family of SSG (Ret) Joseph St. George created this Life Tributes page to make it easy to share your memories.