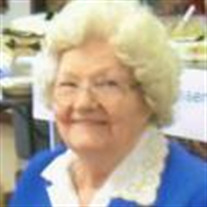 Josephine Brandon, daughter of the late Harold Augustus and Ola Almeda (Robertson) McGowan, was born October 7, 1924, in Swedeborg, Missouri, nestled in the hills and hollers of Pulaski County where she grew and attended Deerlick grade school. She made a profession of faith in Christ at a young age, and at the time of her passing was a member of Swedeborg Baptist Church. Josephine was united in marriage to Glen O. Brandon on October 14, 1941 in Waynesville, Missouri, and to this union five precious children were born. Josephine was a devoted wife and mother, only working outside her home for two years at the H.D. Lee plant. She was a member of the V.F.W. and the D.A.V.A., and enjoyed working in the Thrift Store. She was also a member of the Eastern Star Success Chapter 87 in Richland, Missouri for over fifty years. In her spare time Josephine’s hobbies included crocheting and playing Bingo. However, Josephine’s greatest joy was found in her family and taking care of her home, nothing compared to the time she spent making memories with them. Josephine entered into the presence of her Lord in the early morning hours of Monday, May 23, 2016, in Swedeborg, Missouri having attained the age of 91. Josephine leaves to cherish her memory, her five children: Allen Brandon (Maria) of Garden Grove, CA, Donald Brandon of Crocker, MO, Glenda Beller of Fort Branch, IN, Earl Brandon (Brenda) of Swedeborg, MO and Linda White (Robert) of Eldridge, MO; 12 grandchildren and 10 great grandchildren; one sister: Pansy Dye of Waynesville, MO, one sister-in-law: Betty Ogle (Elvis) of Hazelgreen, MO and two brother-in-law’s: Gary Sheldon of St. Robert, MO and Bob Brandon (Gayle Ann) of Clinton, MO; several nieces, nephews, other relatives and friends. Josephine was preceded in death by her beloved husband, her parents, and her three brothers, Leroy “Roy” McGowan, Harold McGowan and Ralph McGowan; three sisters, Margaret “Margie” Fisher, Edna Lucke and Connie Sheldon; her granddaughter, Melva Lynn Brandon White; daughter-in-law, Sharon Brandon and son-in-law, Richard Beller. Josephine was a loving daughter, wife, mother, sister, aunt, grandmother and friend. She loved unconditionally and will forever remain in the hearts of those who knew and loved her. An Easter Star service was held at 11:45 A.M., until time of service at 12:00 Noon, on Thursday, May 26, 2016, in the Memorial Chapel of Richland with Pastor Doug Jacobson officiating. Soloist, Terry Hubbard sang the “Old Rugged Cross,” and a recording of “How Great Thou Art was also played. Serving as pallbearers were Donald Brandon II, Joel Krafft, Jason Brandon, Austin Krafft, Robert White, Jr., Jacob White, Bryan White and Ronnie Dye. Honorary escorts included, James Vaughan and Aiden Johnsen. Burial followed in the Fairview Cemetery near Laquey, Missouri. Services were under the direction of Memorial Chapel of Richland. Memorial contributions may be made in memory of Josephine Brandon to the Swedeborg Baptist Church or to the American Cancer Society and may be left at the Memorial Chapel of Richland.

Josephine Brandon, daughter of the late Harold Augustus and Ola Almeda (Robertson) McGowan, was born October 7, 1924, in Swedeborg, Missouri, nestled in the hills and hollers of Pulaski County where she grew and attended Deerlick grade school. She... View Obituary & Service Information

The family of Josephine Brandon created this Life Tributes page to make it easy to share your memories.

Josephine Brandon, daughter of the late Harold Augustus and Ola...