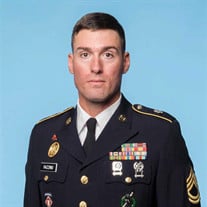 Joshua Leonard Fazzino, son of John Charles and Dawne Anne (Robbe) Fazzino, was born October 9, 1980 in Denville, New Jersey. He passed away Wednesday, November 6, 2019 in his home following a courageous battle with cancer, having attained the age of 39 years and 28 days. Joshua grew up in Old Wethersfield, Connecticut and graduated from high school. Shortly after graduation, Joshua entered the United States Army and was serving faithfully until his passing. He had attained the rank of Sergeant First Class and earned several awards and commendations; some of which include: Army Commendation Medal, Army Good Conduct Medal, Army Reserve Components Achievement Medal, National Defense Service Medal, Iraq Campaign Medal, Global War on Terrorism Medal, NCO Professional Development Ribbon, Army Service Ribbon, Overseas Service Ribbon, Armed Forces Reserve Medal with M Device, along with several others. Joshua furthered his education by obtaining his Bachelor’s Degree in Human Resource Management from Columbia College. On June 7, 2008 in Marshfield, Missouri, Joshua was united in marriage to Tiffany Danielle Bailey. They shared over 11 years of marriage together and were blessed with two children: Carmella and Sofia. In his spare time, Joshua enjoyed working on cars, listening to music, being outdoors while boating and was an avid Patriots football fan. Most importantly, he loved spending time with his family and friends. Joshua will be sadly missed, but fondly remembered by all those who knew and loved him. He leaves to cherish his memory, his wife: Tiffany Fazzino of the home; two children: Carmella and Sofia Fazzino of the home; parents: John and Dawne Fazzino of Boynton Beach, FL; mother and father-in-law: Daniel and Elaine Bailey of St. Robert, MO; sister-in-law: Jennifer Barton and husband Daniel of Camdenton, MO; aunts and uncles: Donna and Donald Ebenstein and Debra and Larry Sweeney; nieces, nephews, other relatives and friends. Joshua was preceded in death by his maternal grandmother: Adelaide Robbe and his paternal grandmother: Edith Fazzino. Even though he is gone from our sight, Joshua will live on in our hearts forever. Services were held at 11:00 a.m. Friday, November 8, 2019 in the Westside Baptist Church of Waynesville with Chaplain MAJ John Sneed and Chaplain CPT Chris Dorsey officiating. Burial with military honors followed in the Missouri Veterans Cemetery. Military honors were provided by the United States Army of Fort Leonard Wood, Missouri. Services were under the direction of Memorial Chapels and Crematory of Waynesville / St. Robert. Memorial contributions may be made in memory of SFC Joshua Fazzino and may be left at Memorial Chapels and Crematory of Waynesville / St. Robert.

The family of SFC Joshua Leonard Fazzino created this Life Tributes page to make it easy to share your memories.