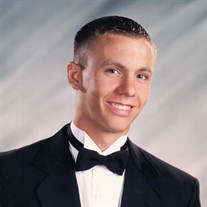 Joshua Dereck “Josh” Gonzalez, son of Russell Steven Gonzalez and Carol Ann (Parr) Gonzalez, was born February 6, 1980 in Tulsa, Oklahoma. During his growing up years, Josh’s father was in the military, so they were transferred to several different duty stations. Josh lived in 10 different states including Germany. He attended elementary school in Ft. Polk, Louisiana, middle school and part of high school in San Antonio, Texas, and he graduated high school in Washingtonville, New York. Josh came to the Fort Leonard Wood, Missouri area and in 2009 he began working for EDP Enterprises on the military installation where he was still currently employed. In his spare time, Josh enjoyed cooking and piddling in his garage. He was always telling a joke or quoting a line from a movie or television show. He was a jack of all trades, master of many and never hesitated to help a friend in need. Josh grew up as Roman Catholic and was a loyal conservative. He was not afraid to try something new and determined to accomplish any challenge. His greatest joy was his son, Matthew. He enjoyed doing different things with him, but they always enjoyed going to monster truck and car shows and riding the ATV together. Josh loved Matthew unconditionally and always treasured the times they spent together. Josh passed away Sunday, January 9, 2022 in his home having attained the age of 41 years. He will be sadly missed, but fondly remembered by all those that knew and loved him. Josh leaves to cherish his memory, one son: Matthew Gonzalez of the home; parents: Russell and Carol Gonzalez of Clearwater, FL; one brother: Anthony Gonzalez (Elizabeth) of Spanaway, WA; Matthew’s mother: Amanda Westfall of the home; grandparents: Richard and Glenna Gonzalez of Wellington, FL; nephew: Nathan; niece: Aurora; many aunts, uncles, cousins, and friends. Josh was preceded in death by maternal grandparents: Glendell and Mary Parr; paternal grandmother: Margaret Gonzalez; and one uncle: Richard Gonzalez Visitation was held from 10:00 a.m. - 12:00 p.m. Friday, January 14, 2022 in the Memorial Chapels and Crematory of Waynesville / St. Robert. Memorial contributions may be made in memory of Josh Gonzalez and may be left at Memorial Chapels and Crematory of Waynesville / St. Robert.

Joshua Dereck &#8220;Josh&#8221; Gonzalez, son of Russell Steven Gonzalez and Carol Ann (Parr) Gonzalez, was born February 6, 1980 in Tulsa, Oklahoma. During his growing up years, Josh&#8217;s father was in the military, so they were transferred... View Obituary & Service Information

The family of Joshua Dereck "Josh" Gonzalez created this Life Tributes page to make it easy to share your memories.