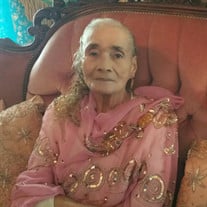 Juanita Fullerton, daughter of the late Assie and Maggie (McGrone) Dawson, was born March 13, 1933 in Indianola, Mississippi. She passed away Sunday, September 23, 2018, in Phelps County Regional Medical Center of Rolla, Missouri having attained the age of eighty-five years. Juanita spent all of her growing up years in Mississippi and in 1962, she moved to Battle Creek, Michigan where she met a young man by the name of Jurel Lee Fullerton. They were united in marriage on March 11, 1967 and shared many wonderful years together. While in Battle Creek, Juanita served as usher for thirty-six years at the Upton Avenue Original Church of God. In 2010, Juanita moved to the Dixon, Missouri area to be close to her daughter, Debra. Juanita was a very giving person and always concerned about others. She ran a day care for twenty-six years and cared for the elderly. In her spare time, she enjoyed cooking, canning and growing flowers. Juanita also loved to travel and had the privilege of traveling to Germany, Luxembourg, Belgium and France. She loved being outdoors especially while going horseback riding. She had a great love for dolls and had several in her home. But her biggest enjoyment was her family. She loved to spend time with them, especially the grandchildren and Michelle McGrone who she thought of as a daughter. Juanita leaves to cherish her memory, her six children, Leonard Robinson (Paula) of Kalamazoo, MI, Debra Judkins (Larry) of Dixon, MO, Charles McGrone of Merrillville, IN, James McGrone of Frisco, TX, Stephen McGrone (Andra) of Ft. Worth, TX, and Sarah Garrett of Battle Creek, MI; twenty-eight grandchildren, fifty-two great-grandchildren, and fourteen great-greatgrandchildren; two sisters, Katie Fullerton and Helen Anderson both of Battle Creek, MI; a number of nieces and nephews; as well as a host of other relatives and friends. In addition to her parents, Juanita was preceded in death by three husbands: Jurel Lee Fullerton, Leonard Robinson, Sr. and Charles E. McGrone, Sr.; four children: Gerald Fullerton, Anita McGrone, Dorice DeCosey and Marilyn McGrone; two grandchildren: Damonne and Terrence McGrone; and one brother: MC Smith. Juanita will be sadly missed, but fondly remembered by all those who knew and loved her. Services were held at 3:00 p.m. Wednesday, September 26, 2018 in the Memorial Chapels and Crematory of Waynesville / St. Robert. Memorial Contributions in memory of Juanita Fullerton may be left at the funeral home.

The family of Juanita Fullerton created this Life Tributes page to make it easy to share your memories.

Juanita Fullerton, daughter of the late Assie and Maggie (McGrone)...