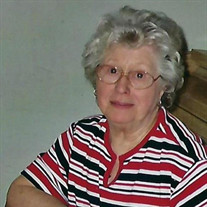 Julia Faye Johnson, daughter of William Franklin Hill and Ora Ethel (Bailey) Hill, was born June 26, 1928 in Waynesville, Missouri where she grew up and graduated from Waynesville High School with the Class of 1945. Julia met a young soldier at the USO on Fort Leonard Wood by the name of Delbert Willis Johnson. They were united in marriage on June 22, 1946 after he did a tour in the South Pacific. They were blessed with four children: Eddie, Darlene, Debby, and Greg and many wonderful memories before he preceded her in death in March 2001. Julia was a hardworking woman and worked as a secretary and bookkeeper for Empire Gas and Ferrell Gas before retiring after 32 years of service. In her spare time, Julia enjoyed quilting and was a member of the Mt. Gibson Quilt Club. She also liked to sew, work with ceramics, reading, cooking, baking, and music. She loved to be outdoors, and you could find her working in the garden. In addition to being a member of the Mt. Gibson Quilt Club, she was also a member of the Rebecca’s, VFW Women’s Auxiliary, and the American Legion Auxiliary. Julia had made an important decision in her life and accepted Jesus Christ as her Savior. This decision would help get through some of the hardest times in her life and also some of the most joyous times. She was a faithful member of the Mt. Gibson Baptist Church of Waynesville, and before her health began to decline, she helped anywhere she could. Her commitment to serve extended to the nursing home where she assisted feeding a patient, Sue Cisco for several years. Julia went home to be with her Lord Sunday, April 25, 2021 in her home having attained the age of 92 years, 9 months, and 29 days. She will be sadly missed, but fondly remembered by all those that knew and loved her. Julia leaves to cherish her memory, her four children: Eddie Johnson (Sue) of Gainesville, FL, Darlene Grosvenor of Waynesville, MO, Debby Myers of Waynesville, MO, and Greg Johnson of Sanger, TX; seven grandchildren; several great grandchildren; one sister: Mickey Hill of Waynesville, MO; special nephew: Andrew Kelley; several nieces, nephews, other relatives, and friends. In addition to her parents and husband, Julia was preceded in death by two half-brothers: Wilfred and Evan Adams; and one half-sister: Opal York. Funeral services were held at 11:00 a.m. Thursday, April 29, 2021 in the Mt. Gibson Baptist Church of Waynesville with Pastor Richard Breeden officiating. Soloist Gilbert Crismon, accompanied by pianist, Becky Lercher, led the congregation in singing “When The Roll Is Called Up Yonder” and then sang “Heaven Will Be Worth It All” and “The Last Mile of the Way”. Serving as escorts were Greg Johnson, David Grosvenor, Dan Grosvenor, Dominic Grosvenor, Dean Johnson, and John Reutter. Serving as honorary escorts were Norman Anderson, Eddie Johnson, Walter Adams, Leo Cook, Jeff Johnson, and Andrew Kelley. Burial followed in the Mt. Gibson Cemetery of Waynesville. Services were under the direction of Memorial Chapels and Crematory of Waynesville / St. Robert. Memorial contributions may be made in memory of Julia Johnson to the Mt. Gibson Baptist Church and may be left at the funeral home or at the church.

Julia Faye Johnson, daughter of William Franklin Hill and Ora Ethel (Bailey) Hill, was born June 26, 1928 in Waynesville, Missouri where she grew up and graduated from Waynesville High School with the Class of 1945. Julia met a young soldier... View Obituary & Service Information

The family of Julia Faye Johnson created this Life Tributes page to make it easy to share your memories.