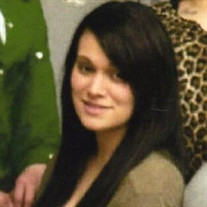 Julia Kay Jones, beloved daughter of Paul Gene Lathrop and Deidra DeAnn (Hall) Curtman, was born on January 22, 1992, in Rolla, Missouri. She departed this life Sunday, May 8, 2016 in Mercy Hospital, Lebanon, Missouri, at the age of 24 years. She grew up in Pulaski County, attending school in Richland, Missouri; however, she obtained her GED while living in Mountain Grove, Missouri in 2016. Julie had professed her faith in Christ in February of 2016 and had been attending Westside Church in Willow Springs, Missouri. Julie was a proud mother to two precious children, Kaelyn and Ethan, who she loved and adored spending time with. They were the apple of her eye. She liked people and enjoyed working as a waitress however, in her spare time Julie listened to music and was an avid reader. When she was a little girl, her parents would snuggle her into her bed, only to come back later and find her under the covers, flashlight in hand reading. In her earlier years she and cousin, Jonathan would watch Walt Disney movies together for hours. She also had a love for animals and loved caring for them; nothing compared to the time she spent with her family, especially her kids, and her brother, Adam. Julie was preceded in death by her maternal grandfather, Johnnie Hall. Julie is survived by her two children: Kaelyn Jones and Ethan Kohler both of Waynesville, MO; her father: Paul Lathrop of Richland, MO; her mother and stepfather: Deidra and Joe Curtman of Waynesville, MO; one brother: Adam Lathrop of Richland, MO; maternal grandmother: Betty Hall of Crocker, MO; paternal grandparents: Jim and Dorothy Lathrop of Hawkeye, MO; several aunts, uncles, cousins, other relatives and friends. Though Julie’s time here on earth was brief, and she leaves behind broken hearts and shattered dreams of what could have been; we thank you God for allowing her the time to touch the lives of all those who knew and loved her. Your struggles are over sweet Julie; now you can experience unspeakable joy with your Heavenly Father and always know…You were loved! Services were held at 1:00 p.m., Wednesday, May 11, 2016 in the Memorial Chapel of Richland with Pastor Steven Dunlap officiating. Music selections that were played included, “Sissy Song,” “I Can Only Imagine” and “Amazing Grace My Chains Are Gone.” Pastor Steve presented Julie’s family with music videos entitled, “Tell Your Heart to Beat Again,” “Good, Good Father,” “Brother” and a slide show of pictures of Julie. Serving as escorts were Adam Lathrop, Travis Becker, Josh Mahan, Jonathan Street, Tim Lord and Officer, Jason Legan. Burial followed in the Memorial Park Cemetery, Crocker, Missouri. Services were under the direction of Memorial Chapel of Richland. In lieu of flowers memorial contributions may be made in memory of Julie and can be left at the Memorial Chapel of Richland. Online condolences can be sent at www.memorialchapelsandcrematory.com

Julia Kay Jones, beloved daughter of Paul Gene Lathrop and Deidra DeAnn (Hall) Curtman, was born on January 22, 1992, in Rolla, Missouri. She departed this life Sunday, May 8, 2016 in Mercy Hospital, Lebanon, Missouri, at the age of 24 years. She... View Obituary & Service Information

The family of Julia Kay Jones created this Life Tributes page to make it easy to share your memories.