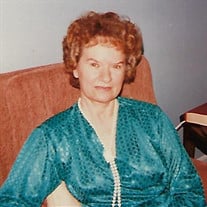 June Evelyn Timmerman, daughter of the late James and Ethel (Worman) Timmerman, was born January 18, 1929 in Kansas City, Kansas. She passed away Monday, February 10, 2020 in the Miller County Health and Rehab of Tuscumbia, Missouri having attained the age of 91 years. As a young girl, June grew up mostly in the Stoutland, Missouri area where she attended school. During her high school years, she was a member of the Glee Club and the Drama Club. She graduated from Stoutland High School with the Class of 1946. During her senior year of high school, June was voted homecoming queen and was the Valedictorian of her class. After graduating from high school, June began attending Drury College in Springfield, Missouri. She began teaching school before she finished her college degree in 1962. June taught First Grade for 30 years. She taught at Swedeborg, Richland, Laquey, Argyle and Westphalia. After retiring from teaching, June moved to Windsor and lived there for 20 years before her health began to decline. In her spare time, June enjoyed working in her garden, watching animals and was an avid reader. She was also a very accomplished pianist and enjoyed just sitting down and playing. June will be sadly missed, but fondly remembered by all those who knew and loved her. She leaves to cherish her memory, three nieces: Dee Cory (Glen) of Brumley, MO, Beverly Dennis of Lake Ozark, MO and Barbara Bristor of Lake Ozark, MO; special great niece and caregiver: Heather Hader of Dixon, MO; other relatives and friends. Even though she was never blessed to have children of her own, June touched the lives of many children throughout her teaching years and she considered them her children. Even though she is gone from our sight, her memory will live on in the hearts and lives of all those she touched. Services were held at 2:00 p.m. Thursday, February 13, 2020 in the Memorial Chapels and Crematory of Waynesville / St. Robert with Pastor Danny Graves officiating. The songs “Amazing Grace” and “In the Garden” were played. Burial followed in the Idumea Cemetery of Laquey, Missouri. Memorial contributions may be made in memory of June Timmerman and may be left at Memorial Chapels and Crematory of Waynesville / St. Robert.

June Evelyn Timmerman, daughter of the late James and Ethel (Worman) Timmerman, was born January 18, 1929 in Kansas City, Kansas. She passed away Monday, February 10, 2020 in the Miller County Health and Rehab of Tuscumbia, Missouri having... View Obituary & Service Information

The family of June Evelyn Timmerman created this Life Tributes page to make it easy to share your memories.